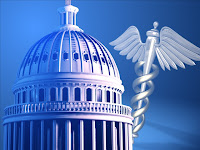 After more than a half a century of debate over healthcare reform, the Patient Protection and Affordable Care Act (ACA) was signed by President Obama and became law on March 23, 2010. The law seeks to extend health insurance to more than 30 million people, primarily by expanding Medicaid and providing federal subsidies to help lower and middle-income Americans buy private coverage. In addition, the ACA created insurance exchanges for those buying individual policies and prohibits insurers from denying coverage on the basis of pre-existing conditions.

If states do not take these necessary measures to set up state exchanges by January 2013, the Department of Health and Human Service will evaluate states to identify if there is a lack of sufficient progress toward establishing an exchange,  a federally-funded exchange will be implemented, which could limit state flexibility.

Of course, it is no secret that Republican state governors are opposed to the ACA, and want it to be repealed, as they deem it unconstitutional. When U.S. Congressional Republicans were unsuccessful at getting this bill repealed following its passage, 13 State Attorneys General filed a lawsuit. The newly amended complaint currently features 26 state plaintiffs, including Indiana. The lawsuit will be heard by the U.S. Supreme Court in March 2012, with a final decision being made as late as 2014.

Following the lawsuit, Daniels, along with 27 other governors, requested that the Obama administration support a fast-track appeal of the aforementioned lawsuits. The U.S. Justice Department disagreed, saying an appeals process should be allowed its normal course.

Next, Governor Daniels, along with 20 other Republican governors sent a letter to the Obama administration outlining proposed changes. Among the proposed changes, the letter requested that states be allowed to decide which insurers can offer products in the state-based exchanges and to waive the minimum-benefit mandates.

Complicating matters, however, many of these plaintiff states are in fact taking measures and money from the federal government to implement ACA. Governor Daniels has been one of the most vocal against the ACA, yet, he is taking steps to not only implement it, Indiana has also accepted $35.7 million in monies from HHS.

In effect, Daniels decisions to accept these funds and move forward is undermining their repeal effort, and as a result, federal judge Roger Vinson reversed his initial order forbidding the Obama administration to implement the law, as plaintiff states such as Indiana are implementing it, which he said “undercut” their own argument.

Yet, Daniels’ approach to health care is similar to Obama’s. Daniels increased cigarette taxes to expand Indiana’s Medicaid program (a government run health care program known as the Healthy Indiana Plan) to families earning $44,000 (200 percent of the Federal Poverty Guidelines). This is higher than the eligibility level proposed by Obama of $31,000 (138 percent of FPG). As a result, from 2008 to 2010, Indiana‘s Medicaid enrollment has spiked and adult enrollment has grown by 21 percent nearly double the national average).  The HIP offers high deductible coverage combined with health savings accounts. Yet, these health savings accounts make people more reliant on the government, which many conservatives would disagree with. For now  it seems, Daniels has found a way to make Medicaid more attractive, as evident in a 94 percent satisfaction rate through HIP, and a retention rate for HIP much higher than traditional Medicaid, and a wait list of 50,000 Hoosiers. However, this may not be the case once ACA is fully enacted.

The main difference between HIP and ACA, is that HIP offers high deductible coverage combined with health savings accounts, whereas ACA expands traditional Medicaid which can offer limited access to health care providers as not all providers accept Medicaid. This may change once ACA takes full effect and more people are on the Medicaid program. For those not eligible for Medicaid, ACA allows for individuals to purchases subsidized insurance coverage from private health insurance carriers.

Complicating matters even more, the 2012 Indiana General Assembly introduced House Bill 1269, Health Care Compact, which authorizes the governor to withdraw Indiana from Medicare, Medicaid, and nearly all federal health care programs. Indiana Legislative Services estimates that because “Indiana could become responsible for administering health care expenditures” currently reimbursed under the Medicare and Medicaid programs, Indiana would have to pay $15 billion a year to maintain the federally supported programs that Hoosiers currently receive.

However, as of February 21, 2012, the bill was amended to exclude Medicare from the Compact, yet vital health services are still at risk. Additionally, because we would be in a Compact with other states, Indiana, who seeks autonomy from the federal government through HB 1269, would actually be dependent upon and obligated to those states within the Compact.

Essentially, by amending HB 1269, and excluding Medicare from the Compact, Indiana has admitted that there is indeed a legitimate need for federal regulation and assistance in the provision of health care for the states—further increasing the chances that Congress will not approve the Compact and/or increasing the likelihood that other Compact states will reject our “membership” into the Compact.

So, because Indiana has a government run healthcare program at the same time that Daniels is decrying the ACA on a national level, we at the Institute are curious:

What is the real motive? Is the Compact Daniels’ real motive, or is it simply a plan by Republican governors to undermine ACA’s current form and to ultimately provide an alternative? Or, is this a response to Obama not accepting the improvements to ACA proposed by Governor Daniels and signed by 20 other governors?

Either way, Indiana cannot sacrifice the federal HHS funds and state flexibility available at this time to set-up ACA, as this may cause the state to have to shoulder these costs in the future.

For more information on the status of ACA in Indiana, including grants received from the federal government as well already realized benefits from ACA in Indiana, please visit:
www.healthcare.gov/law/resources/in.html.