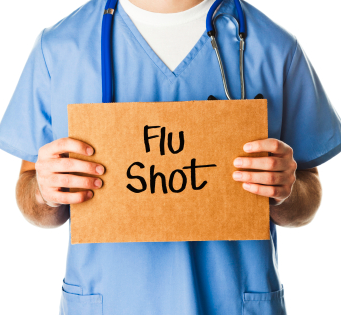 By Teresa Jones: Teresa received her Bachelor of Arts in History from Indiana University-Purdue University Indianapolis (IUPUI) and her Master of Public Affairs with an emphasis in Public Management from the Indiana University School of Public and Environmental Affairs in December 2013. Teresa also works for Catholic Charities Indianapolis, Office of Refugee Resettlement, as a Manager of Match Grant Services. She hopes to one day work for the federal government.

According to the Centers for Disease Control and Prevention, along with national and local media outlets, Indiana is experiencing widespread influenza activity which has already led to three confirmed flu-related deaths this season. If last year’s flu season is any indication of what is to come, Indiana workers should brace themselves for intense flu activity the last two weeks of January. It seems logical that all Hoosiers would stay home from work if infected with the flu, however not all workers in Indiana have access to paid sick leave and therefore go to work sick due to necessity. When workers must go to work sick, better known as presenteeism, they have the potential to spread diseases to co-workers and customers, especially if they are working in positions such as retail or food service where they have close contact with the public. So, how does access to paid sick leave in Indiana rank when compared to other states?


Using 2012 Bureau of Labor Statistics data in conjunction with the Institute for Women’s Policy Research’s “Estimating the Number and Percent of Workers with No Paid Sick Days in Your State” calculator, the estimated number of public and private sector workers in Indiana who lack paid sick days were calculated and then compared to the following representative states: 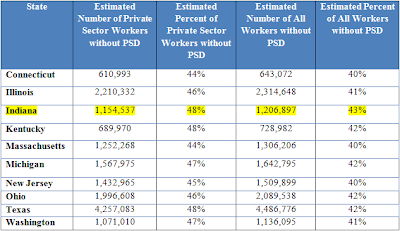 In May 2013, Governor Pence signed Indiana Public Law 88 which prevents local jurisdictions from mandating private industries to provide paid sick leave legislation to their employees, therefore paid sick leave policy can only be altered via state legislation. Within the same year, four other jurisdictions in the nation –Jersey City, NJ; New York City, NY; Philadelphia, PA; and Portland, OR—mandated polar opposite policies in that they require private industries to provide the majority of their employees with paid sick leave. With an estimated 48% of private sector workers in Indiana lacking paid sick leave, and with a high flu season upon us, perhaps the Indiana General Assembly should redirect their priorities. Indiana can do better.
Share This