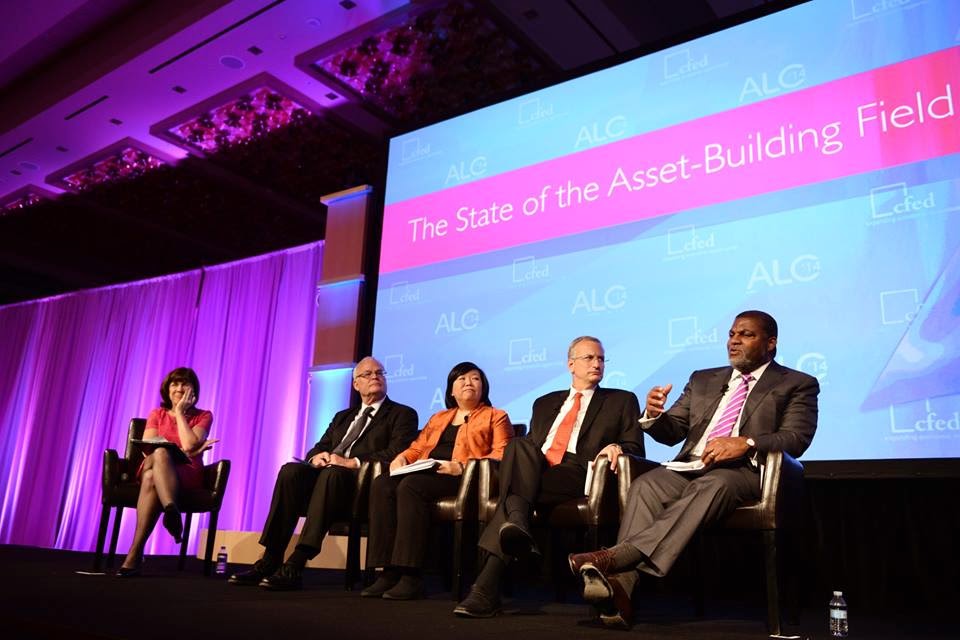 To increase asset acquisition for low-wealth Hoosier families and to strengthen our local economies in Indiana, the Institute (along with Indiana Association for Community and Economic Development and Local Initiative Support Coalition) co-leads the Indiana Asset & Opportunity Network (Indiana A&O Network).

This week, the Indiana A&O Network is participating in CFED's Asset Learning Conference in Washington D.C. where we've had the opportunity to learn more about "building platforms for prosperity".

During this conference, CFED also released - along with Community Development @ CITI - their Assets & Opportunity Local Data Center (a brand new tool to measure financial vulnerability in cities and counties across the nation). With this data, we now know that in Indy, for example, 30.8% are asset poor, 44.7% are liquid asset poor, 14.3% are unbanked and 25.6% are underbanked.

We're also thankful for the time Representative Todd Young, Senator Joe Donnelly and Senator Dan Coats have set aside for us to discuss A&O Network's federal policy agenda to complement our policy goals back home in Indiana.

We'll talk to all of them about the critical role federal tax policy plays in promoting financial security and economic opportunity, highlighting CFED's latest report: From Upside Down to Right Side Up - Redeploying $540 Billion in Federal Spending to Help All Americans Save, Invest, and Build Wealth.

The report highlights that while "the federal government spends $540 billion (in 2013 alone) on tax programs to boost savings, investments and wealth....most of these programs are Upside Down". According to the authors, this means that "households in the top 1% receive more than a quarter of all support from these programs - more than the entire bottom 80% combined." To turn this "upside-down spending right side-side up", the paper features policy proposals "so that all Americans can save, invest, and build wealth."

In addition, to complement positive wealth-building efforts in Indiana, we'll:

Ask Senator Donnelly and Senator Coats to support the Senate companion bill for the American Savings Promotion Act, which allows expansion of Prize Linked Savings. The Act passed the House of Representatives with bipartisan support this week. When Governor Pence signed HEA-1235 in 2014, Indiana joined a handful of states that allow credit unions to offer this innovative savings tool. Senate passage would complement Indiana's efforts by expanding access to banks.

We'll also ask each of them to support the Protecting Consumers from Unreasonable Credit Rates Act of 2013 to reduce the costs for small-dollar credit to 36% APR. According to the Center for Responsible Lending, "payday lenders create a multi-billion dollar debt trap and aggressively market payday loans as a way to meet a one-time need but specifically designed to force borrowers to take out loan, after loan, after loan at an average interest rate of nearly 400%." Their research finds that: the typical borrower is stuck in 9 loans per year; 75% of payday loans come from borrowers with 10 or more loans per year, and; a typical borrower with 10 loans in a year paid $458 in interest alone to borrow $350.

Ask Representative Young to co-author bipartisan legislation to exempt college savings programs - such as 529's and Children's Savings Accounts - from asset tests. Research shows that students who have savings are four times more likely to graduate college. Yet, asset limits act as a disincentive to college savings program participation by forcing families "to choose between saving money for college and putting food on the table." This common-sense legislation would allow all families to save for higher education and complement Indiana's post-secondary completion efforts.