'Inside the Statehouse 2015' - Victories and Missed Opportunities for Hoosier Families, A Post Session Wrap-Up 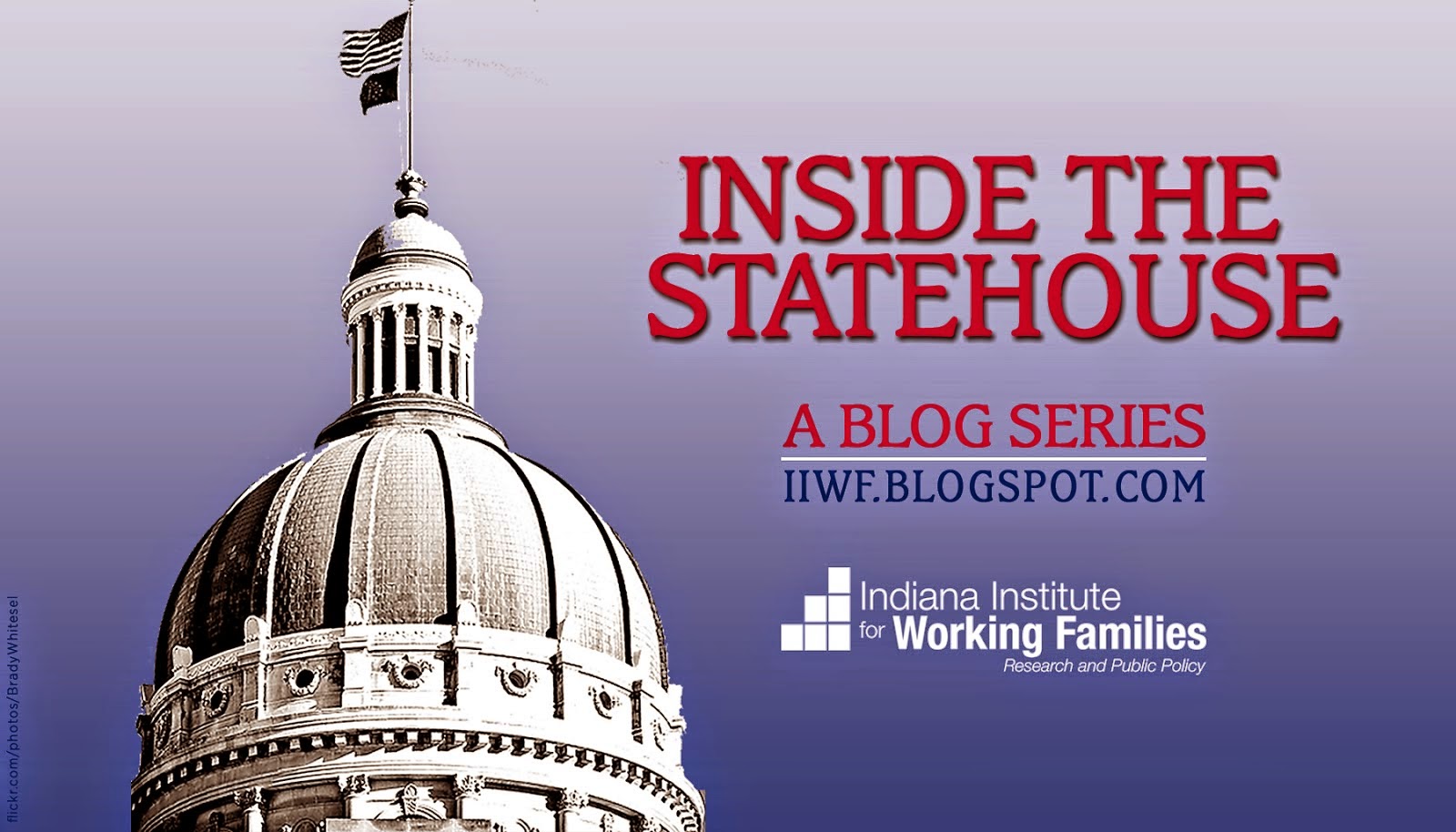 Lawmakers officially concluded the 2015 session late last Wednesday, April 29. Despite a sluggish recovery (still-rising poverty, nation-leading growth in inequality, still-declining household incomes and a dwindling middle-class), the first regular session of the 119th Indiana General Assembly will not be remembered for its focus on righting the economic ship for millions of working Hoosiers. Some progress, however, was made, including a legislative victory from the Institute’s policy agenda that includes efforts to skill up the Hoosier workforce. Below we highlight the victories for working Hoosier families as well as missed opportunities.

Legislative Victories: 2015 legislative victories for working Hoosier families include: increasing financial aid for part-time and adult students; defeating yet another effort to drug test recipients of the already-unresponsive TANF program; as well as several committee hearings and bipartisan support for previously unheard issues.

SEA 509 – Scholarships and Grants: Passed both House and Senate with unanimous support (awaiting the Governor’s signature). The enrolled act is the culmination of the Institute’s efforts over more than two years to better align state resources for the nearly 1/3 of Indiana's adults with no post-secondary education, and those with some college but no degree. Re-shaping the state's current Part-Time Grant into Indiana’s first Adult Student Grant will help those students complete degrees and credentials leading to high-wage, high-demand jobs and will also help close Indiana's skills gap. See our prepared testimony here.

HB 1601 – Various Workforce Development Matters: Signed by the Governor. This act mostly deals with technical corrections needed for the implementation of the new federal Workforce Innovation and Opportunity Act. We supported and are encouraged by the provision allowing for a memorandum of understanding between DWD and FSSA that we think will lead to greater access to the DWDs workforce training programs for Indiana's public benefit recipients. However, another provision of the act repeals a requirement to measure and report on Middle Skill Credentials. We strongly opposed this provision; unfortunately a second reading amendment that would have restored this reporting requirement was defeated.

SB 549 – Removal of Asset Limits for SNAP Food Assistance Program: Received hearing with bipartisan support, but no vote was taken. However, consideration of the bill is progress as Indiana is among just a handful of states that still impose the outdated asset test for SNAP recipients. See our prepared testimony here.

SB 129 – Eligibility for Child Care Voucher: Received hearing with bipartisan support, but no vote was taken. This bill would have increased entry-level eligibility for the Child Care Development Fund (CCDF) to 200% FPL. The current level set at 127% FPL is among the least generous in the nation, currently serving less than 10% of low-income families. This lack of access to childcare results in barriers to work, education and job training. Increasing access will cost money, but bipartisan consideration – including the chair of the committee – is a step in the right direction.

SB 416 – Employee’s Right to Scheduled Employment: Received hearing – making Indiana the first state in the U.S. to consider a statewide policy – but no vote was taken. A growing concern among part-time work in the U.S. is the practice of "just-in-time scheduling" - employers giving little-to-no notice of work schedules, or adjusting to customer demand flows by changing employees' hours on the fly, making it extremely difficult for workers to budget or plan. See our prepared testimony here.

Missed Opportunities: 2015 legislative missed opportunities for working Hoosier families include: failure to pass a work sharing program to help protect jobs; the collapse of a bill to eliminate barriers to mobility by smoothing out the childcare cliff effect, and; a lack of consideration for tax relief, wage adequacy and workplace policy legislation.

HB1066 – Work Sharing: Despite support from labor and business interests and a 2014 study committee, bipartisan legislation that would have created a voluntary work share program to protect Hoosier jobs and provide flexibility to employers – at no cost to the state – was not given a hearing in committee. If work sharing has been in effect during the recession, up to 10,000 mostly high-wage jobs could have been saved.

HB1616 – Smooth out the Childcare Benefit-Cliff in Indiana’s Child Care Development Fund (CCDF): Despite passing the House and a senate committee unanimously, HB 1616 collapsed when the Senate Appropriations chairman refused to give the bill a hearing. However, administrative efforts to solve this problem are underway due to language in the CCDBG reauthorization, and the Institute will monitor and continue to work with FSSA to ensure that the program provides a safe landing into economic self-sufficiency for low-income working families. See our testimony here.

Recoupling Indiana’s Earned Income Tax Credit (EITC): Offered as a bipartisan amendment to SB441, recoupling the state EITC to the federal guidelines would allow families of three or more children to receive the benefit and eliminate the marriage penalty built into Indiana’s EITC.

Increasing Indiana’s Minimum Wage: An amendment to HB1349 failed in the House and two amendments (here and here) to HB1469 failed in the Senate. Despite our low-cost of living, in no county in Indiana does the federal minimum wage of $7.25 support a single adult according to inflation adjusted data from our Self-Sufficiency Calculator. The low is Vermilion County at $7.97, the high is $11.21 in Hamilton County and the statewide weighted (for population) median is $9.26.

Increasing Indiana’s Personal Exemption: No legislation drafted. Indiana's personal tax exemption of $1,000 is the same amount as in 1963. Since then, inflation has eroded the value resulting in what the Indiana DOR calls "a large, hidden, regressive tax increase over time that disproportionately impacts low-income families." Increasing the personal exemption would have helped to move Indiana from its dubious distinction as the 10th most unfair state and local tax system in the country.

SB44 – Fair Pay in Employment: No committee hearing. Indiana's gender wage gap - as measured by median earnings - is 73 cents paid to a woman for every dollar paid to a man. That's a difference of $12,201 annually – equivalent to, the cost of childcare.

HB1122 – Personal Leave for Employees: No committee hearing. The U.S. lags behind almost all developed nations, and Indiana – where 43% of all private sector workers do not have access to a single day of paid sick leave – lags behind the U.S. average and neighbor states. Allowing workers time off to care for a family is good for business and decreases income volatility for low-income workers taking time off to care for family members.

Stay tuned throughout the year for new research, up-to-date information on summer study committees at the Indiana Statehouse, our role in federal policy that affects working families in Indiana, and much more. In 2016 we will continue to advocate for meaningful legislation and investments that reward hard working Hoosiers by ensuring they share in economic growth; reflect the economic reality of low- and middle-income Hoosiers by strengthening work support programs, and ultimately; equip all Hoosiers with the opportunity to obtain the skills necessary in order to attract high-paying, quality jobs that are necessary for a family's economic self-sufficiency. Visit archives of Inside the Statehouse here.