Indiana faces an economic development conundrum and will need a new strategy to solve it. While the state is now down to a 4.9% unemployment rate, we also have record numbers of impoverished and low-income Hoosiers. At a time when Indiana is nearly full-up with low-wage work, in order to move our economy forward the state will need an economic development strategy based on growing ‘good jobs’, because not just any job will cut it anymore.

At the economic development committee meeting of last week’s Council of State Governments (CSG) convention of Midwestern state legislators, I was asked to talk about the status of Indiana’s middle-skill jobs, those that require more than high school but less than a four-year degree. I told them that while 54% of Indiana’s jobs require middle-skills, only 47% of Hoosiers currently have the skills to qualify. This is in part because of Indiana's low educational attainment rate, as only 34.7% of the state's working-age adults have at least a two-year degree. Compounding the problem, the Hoosiers who need to skill-up the most are those who can afford to the least. Indiana leads both the CSG’s Midwestern states and the U.S. average with 34% of working families who are considered low-income, and nearly half (45%) of those low-income Hoosier families have no post-secondary education at all, according to Working Poor Families Project data indicators. 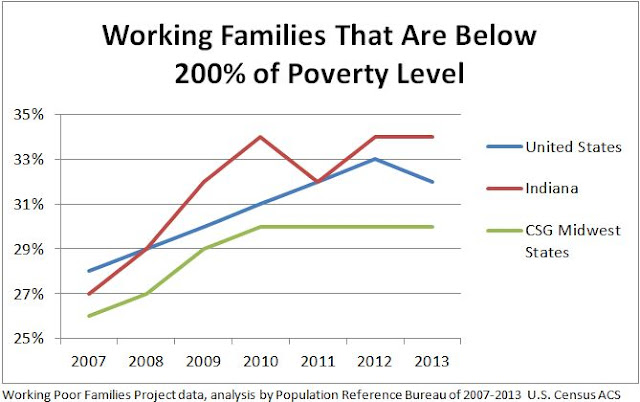 When deciding where to invest tax dollars for economic development, here are three things Indiana’s policymakers should keep in mind:

1. MIT organizational management expert Zeynep Ton’s proven "Good Jobs Strategy" shows that employers who treat their employees as investments, not only with a family-sustaining wage but also with a career ladder of increasing responsibility and empowerment on the job, can be just as profitable - or more. Take for example Andy Peterson, the head of North Dakota’s Chamber of Commerce. When talking about how middle-skills are getting more expensive in an era of decreasing unemployment, his words of advice to companies were simple: “pay your employees more!”

2. You can’t climb a ladder on a shaky floor: According to the Aspen Institute, employees without stability at work won’t be able to gain the skills that employers increasingly demand. Policymakers have choices to both ‘raise the floor and build ladders’ with policies that encourage stable scheduling; provide adequate benefits and flexibility; and allow greater employee responsibility & voice. A policy choice example is removing barriers to work and skills training by supporting high quality child care.

3. Ask the right questions about skills and income – and demand answers! If a company proposes an ‘average’ wage, be sure it’s a high median wage distributed throughout the workforce and not a mean wage skewed by only high executive pay. If a company is asking for applicants to have a certain level of educational attainment, make sure they are actually utilizing those skills and provide a training plan for applicants to get them. An example of a good skills plan is the announcement this month of an employer locating to East Chicago that has training through Ivy Tech for local applicants built into the city, regional, and state economic development package.

To move past the low-unemployment/low-wage quagmire, Indiana needs an economic development strategy that combines raising the floor and building ladders to career pathways for every new job. Instead of trying to build a workforce by picking off low-wage jobs from our neighbors, imagine how strong Indiana’s economy would become for all Hoosiers by encouraging economy-boosting 'Good Jobs' statewide.