Last week, the Institute, a member of Raise the Wage Indiana, was invited to speak at the ‘Indianapolis Municipal Candidates Forum on Living Wages’ at the Indianapolis Central Library. The goal was to educate the candidates and community on the struggles of low wage workers and illustrate the need for a living wage. Here’s a copy of the presentation:

Work is the key to economic self-sufficiency, but simply having a job is not enough; Hoosier families and communities need quality jobs that pay well enough to meet a family’s most basic needs, such as childcare, housing, food and transportation.

Unfortunately, the Indiana Legislature has hamstrung local communities by denying them the ability to raise living standards based on their varying needs, through preemption laws. Indiana’s preemption, however, does not apply to city and county employees, recipients of economic development subsidies and contractors.  This means cities and counties can begin to require living wages for employers that rely on taxpayers to carry out their initiatives.

WHAT IS A LIVING WAGE IN MARION COUNTY? Unbeknownst to most, Indiana has its own living wage calculator: it’s the Institute’s Self-Sufficiency Calculator, which measures the cost of a family’s most basic needs for 70 different family types in all of Indiana’s 92 counties. For example, for a family of three in Marion County (one adult, one preschooler and one schoolage child), the self-sufficient hourly wage is $19.95. For this family, childcare is nearly a third of cost of the family’s basic needs (Table 1). Even for a single childless adult who doesn’t require childcare or more than one bedroom, the living hourly wage is $9.78 – 35% higher than the paltry federal minimum of $7.25.

POVERTY: Nearly half (46.1%) of Marion County residents are low-income, or not economically self-sufficient. After a 63% increase from 2007 through 2013, 11.2% - or 96,328 – of Marion County residents are now in extreme poverty (less than $10,045 annually for a family of three) (Table 2). Poverty discriminates, too. More than 1/5th of women are in poverty, and poverty among African Americans – nearly one-third of the total population - continues to grow (Table 3).

INCOMES: Incomes for low- and middle-income Marion County residents have declined by 20% for the bottom quintile and 0.4% for the middle quintile, while incomes for the top 5% have soared by 34% (Chart 1). Median family incomes have declined significantly (16.4%) for families with children below 18 years of age (Chart 2).

JOBS MARKET: Half of Marion County jobs are in industries that typically a wage below what a family of three requires for economic self-sufficiency, as do the top 3 fastest growing industries (from December 2013 through December 2014) (Chart 3 and Table 4).

My colleague, Andrew Bradley, laid out a ‘Good Jobs Economic Development Strategy’ for Indiana, in which he cited MIT organizational management expert Zeynep Ton’s proven "Good Jobs Strategy". Her research shows that employers who treat their employees as investments, including offering a family-sustaining wage, can be just as profitable for firms, if not more. This, in turn, attracts skilled workers; just ask Andy Peterson, the head of North Dakota’s Chamber of Commerce. When talking about how middle-skills are getting more expensive in an era of decreasing unemployment, his words of advice to companies were simple: “pay your employees more!”

Cities and counties in Indiana must take the lead by raising wages on taxpayer-funded initiatives - as Hamilton County has done - to remain competitive. By doing so, local officials will exert pressure on the state legislature to raise the minimum wage and/or repeal the paralyzing preemption laws so that counties can take the lead on a ‘good jobs economic development strategy’.

TABLE 1: Monthly Income Required for Self-Sufficiency, Marion County, One Adult, One Preschooler, and One Schoolage Child
Data is from 2008. Adjusted for inflation = $45,833 in 2015 dollars 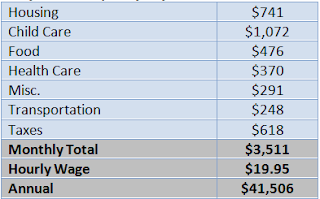 The Calculator uses 2008 data, reflecting the cost of basic needs, pre-recession. Generally, wages have declined, while the costs of most goods have not. Stay tuned for an update announcement. See our Self-sufficiency Standard here: http://www.indianaselfsufficiencystandard.org 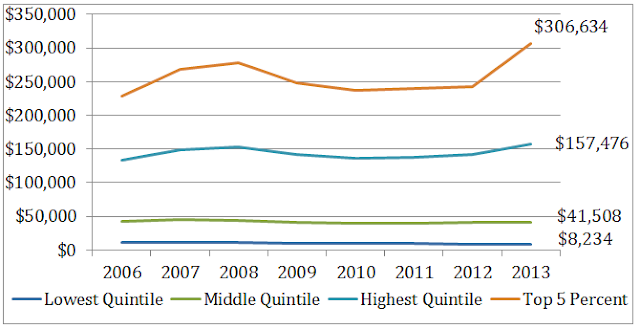 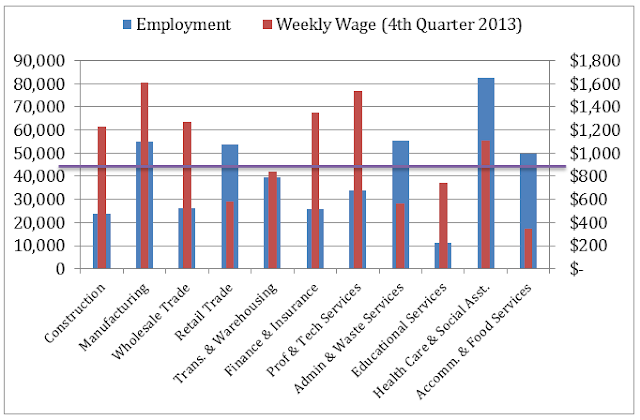