By Lisa Christensen Gee, Senior Policy Analyst at the Institute on Taxation and Economic Policy[i]

Ensuring Indiana has funding needed to adequately repair its roads and bridges over the next several years is a top priority among lawmakers this legislative session. Among the proposed infrastructure improvement plans is HB 1001, which would raise the state’s gasoline tax by 4 cents per gallon, the tax on diesel fuel by 7 cents, and the cigarette tax by $1 per pack. The package would increase road funding by an estimated $500 million a year, with the revenue from the cigarette tax increase offsetting general revenue funds that would be newly diverted for transportation.

The House bill also includes a $294 million tax cut via a gradual reduction in the state’s personal income tax rate to 3.06 percent. By also proposing a reduction in the personal income tax, the bill undermines revenue potential for infrastructure improvements, deprives the state of revenue needed for other critical investments, and exacerbates the unfairness of Indiana taxes (Indiana has the tenth most unfair tax system in the country). Hoosiers among the bottom 80 percent of earners already pay a higher share of their income in state and local taxes than those in the top 20 percent. Under HB 1001, the average taxpayer among the bottom 80 percent would see a tax hike while the wealthiest 20 percent would benefit from a tax cut.

HB 1001: Taxing the Bottom and Cutting the Top

Our analysis[ii] of HB 1001 illustrates how upper-income taxpayers come out ahead under this proposal. Gas and cigarette increases are regressive—meaning that middle- and low-income families pay a larger share of their incomes than the wealthy. As shown in Table 1, taxpayers making less than $22,000 will see their taxes go up by 0.7 percent of their incomes while taxpayers in the top 5 percent will pay increases less than 0.05 percent under the proposed gas and cigarette changes.

If lawmakers are intent on offsetting regressive consumption tax increases with tax cuts, there are more equitable ways to do it. We considered three alternatives, all of which would cost the same amount as the proposed rate cut but better target the cut to households who are already being asked to pay a higher share of their income in Indiana taxes.

The three proposals include raising the personal exemption by $1,530 for all taxpayers, raising the personal exemption by $2,150 for households with income less than $100,000 (or $50,000 if single or married filing separately), and coupling Indiana’s Earned Income Tax Credit (EITC) to the federal EITC and increasing it from 9 percent to over 32 percent. Table 2 shows how each of these alternatives compares to the proposed HB 1001 rate reduction. 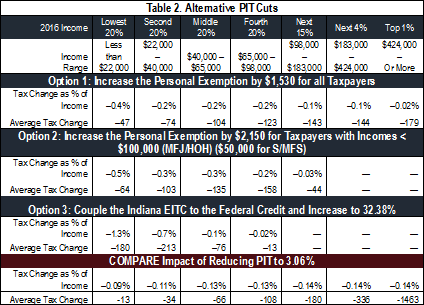 In Option 2, the tax cut is more narrowly targeted to the bottom 80 percent of earners. While these earners would still be paying a higher net tax under HB 1001 (the average increase in gas and cigarette taxes would be greater than their average income tax cut), this alternative gets closer to holding these taxpayers harmless than HB 1001’s rate cut.

Option 3 is the most targeted of the alternatives presented, targeting the cut to the bottom 60 percent of earners. Coupling Indiana’s EITC with the federal credit and increasing its value from 9 to over 32 percent would fully offset the impact of the proposed tax hikes on the average taxpayer in the bottom 40 percent of earners. It would also help offset the disproportionately high rate of taxes these earners pay in all Indiana state and local taxes.

The gas tax is a critical source of revenue for funding state transportation infrastructure needs. Indiana hasn’t raised its gas taxes in 13 years, making money to pay for these critical investments harder to come by, especially in light of the growing costs of materials and construction. Given this, lawmakers’ efforts to raise the gas tax are applaudable, but pairing an increase for transportation funding with a large tax cut undermines the purpose of the tax increase while shorting the state of revenue needed to fund other critical state investments, including higher education, public health, and safe communities. Indiana would be better off pairing regressive tax increases with targeted tax cuts for working families rather than enacting cuts that tilt the state’s upside down tax system more in favor of the wealthy.

[i] The Institute on Taxation and Economic Policy (ITEP) is a non-profit, non-partisan research organization that works on federal, state, and local tax policy issues. ITEP’s mission is to ensure that elected officials, the media, and the general public have access to accurate, timely, and straightforward information that allows them to understand the effects of current and proposed tax policies. ITEP’s work focuses particularly on issues of tax fairness and sustainability.

[ii] This analysis was performed using the ITEP Microsimulation Tax Model, which is a tool for estimating the impact of federal, state, and local taxes by income group.  It uses a very large stratified sample of federal tax returns, as well as supplementary data on the non-filing population, to derive estimates that apply to taxpayer populations at the state level. The U.S. Treasury Department, the Congressional Joint Committee on Taxation, the Congressional Budget Office, and several state departments of revenue use similar models.  For a more detailed explanation of the ITEP Tax Model, see http://www.itep.org/about/itep_tax_model_full.php

[iii] While Indiana has a flat income tax rate, the effect of its income tax is not perfectly “flat” because the state offers some sensible tax breaks (personal exemption, rent deduction, EITC, etc.). Because of these tax breaks, a different portion of households’ income is subject to the flat income tax rate—for example, a personal exemption of $1,000 exempts 20% of income from taxation for a family with $5,000 while this same exemption only exempts 0.002% of income for a household with $50,000. Since a larger portion of middle- and high-income families’ income is subject to the income tax, when there is a reduction in the tax rate, they benefit more from the cut. (Note that while low-income families pay a smaller share of their income in personal income taxes, they still pay the highest share of their income in all state and local taxes combined.)