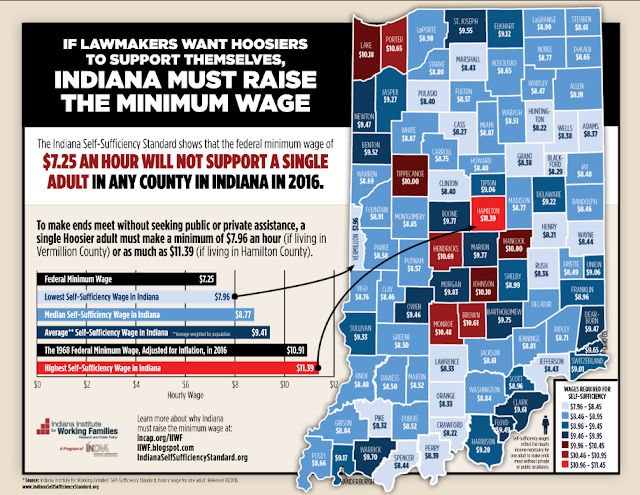 In Indiana, minimum wage workers are expected to live on $7.25 an hour. How can they do this? Well, the simple answer is they can’t. Research shows that the current federal minimum wage, which Indiana uses, cannot sustain a family living on a basic needs budget, one that allows individuals and families to be self-sufficient without allowances for things like dining out or sending kids to after-school activities. To make up for their budget shortfalls, minimum wage workers must either work a ludicrous number of hours, as described in Reason 6, or rely on public, charitable, or family assistance. Minimum wage workers putting in time on the job should be compensated for their hard work at a rate that enables them to be self-sufficient and have sufficient time to care for and spend with family. As productivity increased by 72.2% from 1973 to 2014, the typical worker’s hourly wage increased by only 9.2% during the intervening 41 years. Simply from a worker productivity perspective, it’s time for workers to get the raise they have earned! As session draws to a close tomorrow, another year has passed in which legislation aimed at raising the minimum wage was not even given a public hearing (SB 211 and SB 369). Below is a list 16 reasons why Indiana should have raised the minimum wage in 2016.

1.    Outdated:  There is not one county in Indiana where where working full time at the minimum wage of $7.25 per hour is sufficient to support even a single adult, as shown in our new Indiana Self-Sufficiency Standard 2016 report. When looking at self-sufficient hourly wages across the state, the low is Vermillion County at $7.96, the high is $11.39 in Hamilton County, with the median self-sufficiency wage across all Indiana counties at $8.78.
2.    25 Years Without a Raise: Waiters and waitresses in Indiana are paid $2.13 per hour by their employers (29% of the minimum wage). The last time they saw a raise was a quarter-century ago (1991), even as the industry has seen strong growth and profitability. According the National Women's Law Center, gender gaps and poverty rates for tipped workers are smaller in states where the tipped minimum wage is equal to the minimum wage.
3.  Wage Erosion: Because the value of the minimum wage has been left to erode due to inflation, more workers are earning poverty wages. Reducing the erosion of wages would be a good step towards reducing income inequality. The U.S. Conference of Mayors cited the "dramatic decline" in the value of the minimum wage in their recent 'Income and Wage Gaps Across the US' report. The inflation-adjusted minimum wage in 1968, when it was at its peak, has the same buying power as $10.90 in 2015 dollars.
4.    It's Not Just for Teens Anymore: Contrary to common perception, less than a quarter of workers earning the minimum wage (or close to it) are teens; 56% are women, 28% are raising families and 44% have at least some college education. According to the Brookings Institution, “the worker likely to be affected by a raise in the minimum wage today is a woman in her 30's working full-time, with a family to support."
5.  Gender Gap: In 2014, Hoosier women earn just $0.75 cents to each dollar their male counterpart earns (the 9h largest gender gap in the U.S.). Because 2/3rds of minimum wage workers are women, raising the wage (and the tipped wage) is a good step towards equalizing pay. According to a GovBeat analysis of EPI's report, 20% of female workers in Indiana would be directly affected.
6.    Working Towards Self-Sufficiency: In Indiana, the median number of work hours at the minimum wage for a single adult to become self-sufficient is 48 hours per week. The number of hours increases significantly to 108 hours for a single adult with one preschooler and one school-age child. For a family with two adults, a preschooler, and a school-age child, each adult would need to work 64 hours for the family to be self-sufficient.
7.    Housing: A full-time minimum wage worker in Indiana, who works 40 hours per week for four weeks, earns $1,160 per month. The median Fair Market Rent for a single adult across Indiana’s counties is $526, equaling 45% of a minimum wage worker’s monthly wages. This is 15% more than the rule of thumb that housing costs should be about 30% of a worker’s monthly income.
8.  Childcare: The cost of childcare almost exceeds monthly earnings for minimum wage workers. For families with one preschooler and one school-age child, the median cost of childcare across Indiana’s 92 counties is $942. Comparing that expense to the monthly minimum wage for a full-time worker, there is little incentive for parents to work at the minimum wage.
9.    637,000: That's how many Hoosiers (23.4% of the workforce) would get a raise in 2016 if Congress raised the wage to $10.10 per hour, according to a report from the Economic Policy Institute. This includes those affected directly (436,000 making less than $10.10) and indirectly (201,000 making just above the minimum wage whose wages would be pushed up due to pay scale adjustments). Fortunately, Indiana lawmakers can give a raise to Hoosier workers, instead of waiting for Congress to act.
10.  $1,000,000,000: According to the same EPI analysis, this large scale policy tool for working families would equal a cumulative raise of nearly one-billion dollars for Hoosiers.  Like tax breaks for low- and middle-income workers, raising the minimum wage puts more money in the pockets of working families.
11.  Growing the Tax Base: Standard and Poor's cites rising income inequality as "contributing to weaker tax revenue growth", making it more difficult for state and local governments to invest in education and infrastructure.
12.  Myth of a Spike in Unemployment: Critics of raising the minimum wage often argue that an increase will cause a spike in unemployment. However, decades of research has shown this argument is unfounded. Two recent meta-analyses of research on minimum wage increases during the 1990s found that “the minimum wage has little or no discernable effect on the employment prospects of low-wage workers.”
13. Economic Growth: In a stagnant economy, increasing wages can lead to economic growth. Low-wage workers tend to spend any additional income they receive on their basic needs. If the minimum wage increases, these workers would pump money into the economy, boosting GDP which would produce job growth in the broader economy.
14. Future Generations: Low wages not only affect adults, but children as well. Children whose parents work for the minimum wage live below the federal poverty line. Research has found that children being raised in poverty have lower academic achievement, poorer nutrition, fewer job prospects as adults, and worse physical health than their more affluent peers. Raising the wage will help ameliorate the deleterious effects of poverty on children.
15. A Moral Imperative: Not only is raising the minimum wage an economic imperative, it is also a moral one. In an open letter to Congress, over 350 faith leaders urged legislators to raise the minimum wage, writing “legislation requiring employers to pay a living wage is indispensable to ensuring that no worker will suffer the indignity of poverty.”
16. Public Opinion: A strong majority of Americans support raising the minimum wage. According to a 2015 New York Times poll, 71% of respondents favored raising the minimum wage to $10.10. It’s time for legislators to listen to their constituents.