Inside the Statehouse - Week 14 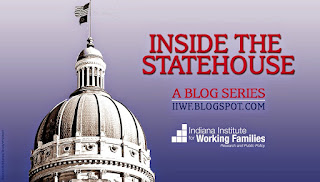 The Institute has been working this session and this week to address issues like SNAP asset limits, employment as a former offender, and rising housing costs in Indiana. Saving in order to become economically self-sufficient is near impossible with current SNAP asset limits, but SB 154 helps. Finding a job as a former offender is tough and SB 312 is not making it any easier. Housing costs are up making affordable housing hard to find and SB 558 could increase those problems. Read on for more on how the legislature and the Institute are (or are not) addressing these issues this week.

Tuesday, the House passed SB 154 with a vote of 97-0! This bill raises the asset limit for SNAP eligibility to $5,000 from $2,250, which will increase the number of Hoosiers receiving this essential food supplement and allow those already receiving benefits to save for life’s eventualities on the path to self-sufficiency. This bill also requires FSSA to look at the costs of positive errors, meaning benefits were granted when they should not have been. When SNAP benefits are granted to someone who does not actually qualify, those individuals have to pay back the money. FSSA must submit a report of the projected amounts that individuals receiving SNAP benefits would be required to repay using the actual amounts from Jan-Sept, 2018. This part is in response to a Representative who thought it inappropriate for Hoosiers to repay because of the state's error. The House bill differs significantly from the Senate bill, which had an asset limit of $10,000, included exclusions of assets in savings accounts in the names dependent children and certificates of deposit, and allowed for self-attestation of assets; we are disappointed the House did not include these beneficial aspects. In the end, even if SB 154 only raises the asset limit, its passage is a step toward cutting some red tape for the most financially vulnerable Hoosiers and continues the conversation of how we address hunger and poverty at the state level.

The Institute released an open letter to Governor Holcomb this week regarding the ban the Ban the Box bill, SB 312. This bill passed the Legislature despite bipartisan concern, but there is still action to be taken to provide meaningful employment protections that will reduce recidivism and strengthen the workforce within communities. Call Governor Holcomb at 317-232-4567 or write and ask him not to sign SB 312 without an Executive Order to 'Ban the Box' for Indiana's public employees!

Affordable housing in Indiana is hard to find and prices keep increasing. This week SB 558 Leases and sales of real property (Holdman) had a hearing in House Judiciary. There were over twenty people there to testify on the bill and discussion lasted about two hours before it was cut off for a deadline, excluding 6 people in opposition from speaking on the bill, including the Institute. Much of the conversation was on a part of the bill dealing with fees for excessive calls to police creating a nuisance. The Institute has been working hard all week to convince legislators of the dangers this bill poses.

The Institute opposes HB 558 for several reasons. First, it includes language defining reasonable occupancy as two people per bedroom and specifically excludes living and dining rooms from consideration as reasonable sleeping areas. This limits families’ abilities to find affordable housing especially when housing units are being created with more square footage and more habitable space. When families with more than two children have to rent a unit with three bedrooms instead of two, it can increase their housing costs by thousands per year. You can see the increases by bedroom in different areas of Indiana here. Second, the bill includes language that limits municipalities from requiring new developments to reserve a portion of the property for affordable housing unless they provide incentives. This cuts off local zoning boards and commissions from addressing their housing needs. Third, similar to the last point, there is language prohibiting municipalities from designating that certain property must be leased or sold to certain occupants or from controlling price of real property. Localities understand where their affordable housing shortages are, but this limits their ability to address the issue. This bill passed out of committee 5-3. It had two small amendments on second reading and passed the House 78-19.

House bills with movement this week:
HB 1001 State biennial budget (Brown) had two amendments added on second reading, one relating to Gary Schools and the other making small changes and allocating $250,000 each to USS Indiana Commissioning Committee and Welcome Home Vietnam Veterans, Inc. There were thirty-nine amendments filed, six were called and failed, two were passed, and the rest were statements from Democrats on their disagreement on the budget. The bill passed 39-9.
HB 1002 Transportation infrastructure funding (Soliday) passed 34-13. This bill includes an increased gas tax among other fees and regulations relating to transportation and Indiana Department of Transportation (INDOT).
HB 1178 Voter registration opportunity for all motor vehicle transactions (Kersey) passed 47-0 and returns to the House with amendments.
HB 1337 Telemedicine matters (Kirchhofer) w/ amendments
HB 1384 Various education matters (Behning) passed 36-12. This bill includes language on adult literacy similar to that in SB 108. The difference is this version includes the entity charged with creating the report regarding adult literacy.
HB 1394 Waiver of local occupational license fees (Frizzell) passed 37-11.
HB 1439 FSSA matters ( Kirchhofer) passed 48-0.
HB 1450 Property tax matters (Leonard) had a couple of amendments and passed 48-0.
HB 1470 Government information (Ober) had much discussion, like in committee, over privacy of data. In the end, it passed 34-14.
HB 1523 Search fee for public records requests (Richardson) was amended to exclude title searches from the search fee.
HB 1539 Financial institutions and consumer credit (Burton) passed 46-0 and was returned to the House with amendments from committee, but without any payday language.
HB 1626 Study of universal service for telecommunications (Negele) passed 47-0.

The Senate will meet at 1:30pm on Monday 4/10
Their schedule is not yet posted.