This Labor Day, Hoosiers are back on the job in record numbers - and the state needs only 75,900 more jobs to reach its pre-recession employment rate - but our hard work is less likely to be protected by union coverage, and our pay keeps slipping compared to our neighbors’, too. Hoosiers who have been left out of the national economic recovery should ask themselves why attacks on labor rights should be allowed to keep shrinking our paychecks, job quality, and families’ futures.

Hoosiers do better when we band together to make our voices stronger - whether in the PTA, in ag & rural electric co-ops, or in collective bargaining on the job. But attacks on our rights to negotiate better deals at work have had a negative impact in recent years that can be seen in the declining rate of workers protected by union contracts. A new report by the Economic Policy Institute shows that only 11.4% of Hoosier workers have union coverage, down from 22.6% in 1989.  32% of Indiana’s public sector workers are covered (after years of attack), and a mere 8.5% in the private sector have union coverage following the so-called ‘right to work’ law. Indiana now has the lowest union coverage of any of our neighbors, including Kentucky. 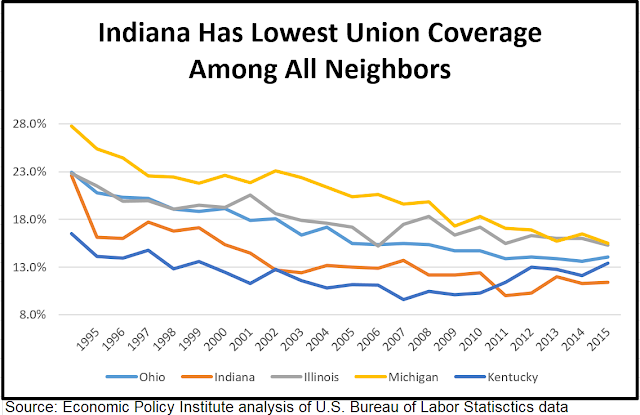 This disproportionate lack of workers’ voice in Indiana is doubly a shame, because today’s unions are increasingly diverse and are one of the best routes for workers to secure guarantees for high paying, high quality jobs. EPI found that unions workers are more likely to have essential job benefits like employer-sponsored health insurance, paid family leave, paid sick time, and fair schedules. Unions have helped raise wages and standards for members and non-members alike. Nationwide, about two-thirds of workers age 18 to 64 covered by a union contract are women and/or people of color, and unions help close gender and racial wage gaps. More than half of union members have an associate degree, and two in five have a bachelor’s degree or more education. And in Indiana, a new generation of workers’ voice is bringing the spirit of social activism to counter Indiana’s restrictive state labor laws that go hand-in-hand with flagging incomes. 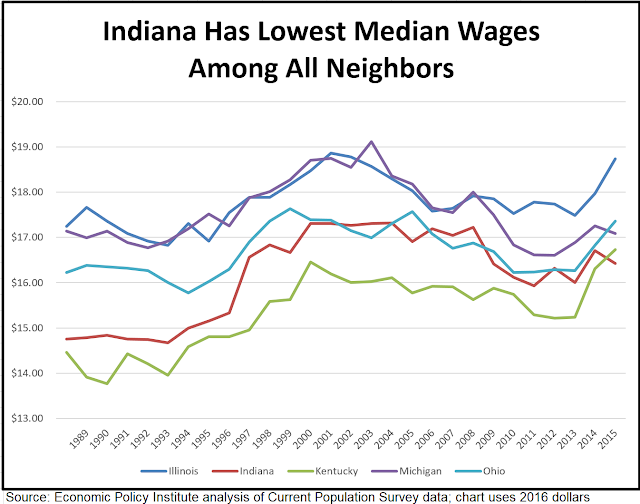 Indiana’s decline in union coverage and attacks on labor rights correlates with declining income rates. Hoosiers' incomes peaked in value in 1999 and haven’t been the same since. In fact, Advisor Perspectives labeled Indiana a ‘21st Century Loser’ in incomes, tied for the 9th-largest drop since 2000. This trend hasn’t abated since Indiana passed its so-called ‘right to work’ law in 2012. In fact in 2015, the same year Indiana repealed the common construction wage, Indiana’s median household income grew so little compared to other states that our income ranking dropped from 34th to 36th in the nation. Indiana now has the lowest median wages of any of our neighbors, including Kentucky. If there are benefits to undercutting Indiana’s labor standards, they aren’t showing up in the average Hoosier’s paycheck, or even in employers’ ability to find a skilled workforce. So why keep them?


Note: the Indiana Institute for Working Families receives no funding from union or labor sources, but supports collective bargaining for workers based on data and principle.

Please donate to help us advocate for an Indiana economy that works for all Hoosier families!
Share This