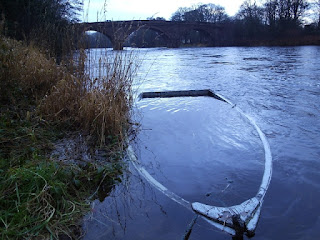 Photo credit: © Copyright Donald Bain and licensed for reuse under this Creative Commons License
New Census data show that 2016 was overall a year of gains for Indiana, making incremental progress on the long-term task of reclaiming its pre-recession status. Indiana’s gains are a partial reflection of the national recovery as U.S. incomes finally pulled above their previous  high in 1999. The U.S. also saw rare year-on-year improvements in poverty and health insurance coverage. And while Indiana didn’t match these highs, it did see areas of encouraging gains, including a strong single-year rate of increase in median household income and a decrease in child poverty. However, several troubling indicators show where Indiana must focus now: a poverty rate that did not significantly improve (and a poverty ranking that worsened four spots in just one year), racial income and poverty disparities, and a gender pay gap that actually widened, making Indiana’s gap the 6th highest in the United States.

Poverty: While the U.S. saw a second straight year of significant poverty decrease, Indiana did not match this accomplishment. Despite near-record lows in unemployment, improvements in Indiana's poverty rate stalled out in 2016. Nationwide, the official poverty rate in 2016 was 12.7%, down 0.8% and with 2.5 million fewer Americans living in poverty than in 2015.[1] And while the number of Hoosiers living in poverty decreased to 906,077 or 14.1% in 2016, the decrease was within the margin of error compared to 933,181 or 14.5% in 2015, after seeing a previous significant decrease from 15.2% in 2014.

However, larger improvements in other states meant that Indiana’s poverty ranking worsened four spots in just one year, from the 26th-highest poverty rate in 2015 to 22nd highest in 2016. Poverty also remained flat in Ohio and Kentucky in 2016, while Michigan and Illinois saw a significant decline in the poverty rate. Among our neighbors, only Illinois had a lower poverty rate than Indiana. Several discrepancies among Indiana’s neglected and more vulnerable populations point to potential reasons for our post-recession progress on poverty stalling out:
• Hoosier family-level poverty decreased significantly overall, but saw mixed results when broken out by family type. Single moms with children under 18 saw a significant decrease in poverty, from 43.2% in 2015 to 39% in 2016. But poverty for married families remained flat, with a non-significant increase from 4.3% in 2015 to 4.5% in 2016.
• Child poverty decreased significantly from 20.9% in 2015 to 19.5% in 2016. However, Indiana remained 21st-highest in child poverty rankings compared to other states.
• The percentage of seniors (age 65+) in poverty increased from 7.2% in 2015 to 7.7% in 2016, 40th highest among all states. While the change over the past year was not statistically significant, the increase from 2014’s rate of 7.0% is significant.
• Both male and female poverty rates declined, with the gap narrowing between the two. 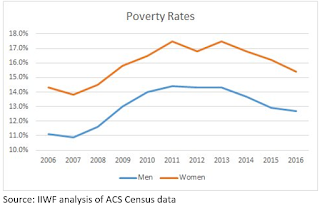 Economic Self-Sufficiency: Beyond the simple poverty metric, fewer Hoosiers lived below 200% of the poverty threshold (a basic measure of economic self-sufficiency) in 2016 than in 2015. In 2016, 2,086,942 Hoosiers were low-income by this measure, or 32.4% of the state’s population (compared to 2,142,960 or 33.4% in 2015). The rate of almost 1 in 3 Hoosiers unable to afford basic costs is still way too high but we also saw major improvements. Indiana likely saw a bigger decline in this ‘low-income’ metric than it did in actual poverty, meaning more Hoosiers moved from between 100% and 200% of poverty up, than moved out from under poverty itself. [2]

And despite continuing signs of improvement, the percent of low-income Hoosiers is still above pre-recession level of 29.6% in 2007. Since 2005, basic costs have increased 60% for Hoosier families with children while wages have increased only 9%. Among these costs, housing insecurity is a particular concern, especially for those below self-sufficiency. In 2016, 46.1% of Hoosier renters paid more than 30% of household income on rent, a key measure of housing burden. While this ratio is less than 47.8% in 2015, the small change points to the need for effective policy action to support self-sufficiency for low-income families.

Household Income and Pay Gaps: Indiana had a good year for household income working incrementally back to pre-recession levels, but the gains were thinner at the bottom and some racial and gender gaps widened. Indiana’s median household income increased to $52,314 in 2016 from $50,896 in 2015. While all of the state’s neighbors saw a significant increase, Indiana’s gain of 2.8% was the largest. This was also the 17th highest gain among states, and beat the U.S. average rate increase of 2.4%. Another encouraging stat is that in 2015, 49.1% of Hoosier households earned less than $50,000, while in 2016, that proportion was down to 36.9%. However, Indiana’s median household income is still the lowest among all neighbors (except Kentucky) and retained its ranking of #36 nationwide. And despite the 2016 increase, Indiana's incomes haven't recovered from the recession, and are still down  $2,616 from 2007 (in 2016 dollars). [3]

The seeming incongruity between a rising poverty ranking and strong median household income growth in 2016 can be partially explained by discrepancies in growth among income levels and by race and gender. The uneven growth of Hoosier incomes is evident among income quintiles – the largest gains were for households in the third income quintile (the middle 20% of earners) where both the mean & upper limit of quintile grew about 3% (in real dollars). However, there was only a 0.5% income growth for the poorest 20% of households. Every other quintiles’ growth was about the same.

Strikingly, Hoosiers experienced a widening gender and racial pay gap in 2016. Indiana saw a 2 percentage point increase in the gender pay gap among full time, year-round workers - from 24% in 2015 to 26% in 2016 - even as the U.S. gap declined. Men saw a $2,065 increase in median earnings over 2015 while women’s earnings climbed only $687. The annual difference in wages between full time working Hoosier women and men is now $12,717. Indiana now ranks 6th in the U.S. for highest gender wage gaps (up from 12th-highest in 2015), and has the highest pay gap of our neighbors, with Ohio at 23%, Michigan at 22%, and both Illinois and Kentucky at 20%.

Median earnings were up for White & Latinx men and women, but down for Black & Asian men and women in 2016. Biracial men gained, but biracial women saw a decline. 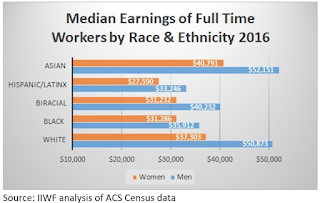 Educational Attainment: Indiana showed positive gains in educational attainment with a decreasing rate of adults 25 and older with a high school education but no diploma, from 8.0% in 2015 to 7.9% in 2016. Indiana also saw an increasing educational attainment rate for adults 25 and older with at least some college (from those with some college but no degree all the way to PhD earners), from 53.9% in 2015 to 54.6% in 2016. There was a decline in the ratio of adults with a high school diploma or equivalency – from 34.3% in 2015 to 33.7% in 2016, but this may be due to a higher proportion with at least some college education. State policies to provide better tuition support for higher education seem to be paying off, but work is not done to remove non-academic barriers for adult students. Only 87,857 (or 9.7%) of Indiana’s impoverished population was enrolled in post-secondary education in 2016, suggesting Indiana must do more to reach low-income students and support their efforts to pursue family-sustaining career pathways.

The safety net: Over the last few years, Indiana has seen decreases in the percentages of households using the Supplemental Nutrition Assistance Program (SNAP). In 2013 the rate was 13.1%, and in 2014 it was 12.8%. The new data follow this pattern, showing a statistically significant decrease from 11.5% in 2015 to 10.8% in 2016. While reductions in SNAP numbers are welcome as a result of poverty decreasing, it is important to measure the success of the program based on how many people it helps lift out of poverty, not on how many people are dropped from the rolls. With a statistically flat poverty rate, this significant decrease in SNAP raises questions about how Indiana administers safety net programs and policies.

On the whole, the new Census data show that a rising national tide is now lifting many boats in Indiana, but certain groups remain anchored below water. Unfortunately, stagnant poverty rates and incomes for the poorest Hoosiers are not going away on their own, neither are gender and racial gaps closing themselves. In order to see improvements, state policy must address the systemic barriers some groups of Hoosiers experience that are holding them back even as others see gains. But the good news is that Indiana has a history of solving problems when we give them attention, as has happened with our consistently high ‘business-friendly’ rankings. When Indiana sets its mind on improving the economic status of low-income Hoosiers, it will see success there, too.


[1] Note that the official national poverty rate is determined using the Current Population Survey, while state and local poverty data comes from the American Community Survey.
[2] However, this movement isn’t necessarily sequential - people who came out of poverty could have jumped well above 200%, and conversely people above 200% could have fallen all the way down below the poverty threshold due to individual circumstances.
[3] IIWF calculations of Census ACS data from 2007 and 2016.