Tuesday, November 28, 2017
ACTION ALERT: The Senate is expected to vote on this plan as soon as this Thursday! Call (202) 224-3121 and ask both Senator Young and Senator Donnelly to VOTE NO! 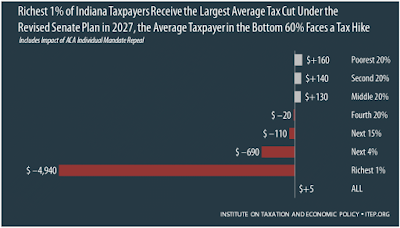 The Senate is expected to vote this week on their hastily-assembled tax plan which would shortchange everyday Hoosier taxpayers and cut off ladders to economic opportunity, all to pay for $16.6M in additional taxes sent out-of-state. Before it’s too late, Hoosiers should make sure their Senators are aware of these effects, and then hold them accountable for their votes.

While the Senate tax plan is being sold as ‘tax relief’, like the House bill and administration framework, this relief comes mostly at the very top and is paid for by everyone below. The Senate plan actually raises taxes for the bottom 60% of Indiana’s middle-class and working families after temporary credits phase out by 2027. That leaves regular Hoosiers with an average tax hike around $140 and holding the bag for the permanent tax cuts that average nearly $5,000 for the top 1% of earners, as well as $22 billion in yearly giveaways to foreign investors. The plan is so lopsided that Indiana would pay $16.6 million more in taxes every year by 2027 than it does before the Senate plan, meaning Hoosiers would pay $16.6 million out of their paychecks in order to subsidize cuts for largely out-of-state millionaires, corporations, and foreign investors. (That $16.6 million would more than double the amount Indiana added to its ‘On My Way Pre-K’ program this year, and would be better used for there, or to address the opioid epidemic, or to skill up low-wage adults, etc.)

To help pay for these upside-down cuts, the Senate plan would remove the individual mandate from the ACA, which would leave 245,000 more Hoosiers without health insurance by 2025 (of 13 million nationwide). In addition, the Senate plan would increase marketplace premiums for Hoosiers by $1,360 in 2019, and would cause a hole of $519 million in Medicare funding for Indiana to fill.

In addition, to pay for their plan the Senate would remove popular tax credits and services that help Hoosiers reach the middle class and economic security. The plan would dramatically decrease the use of tax credits for mortgages, state and local tax deductions, even graduate studies (a killer at a time when Indiana’s employers struggle to find highly-skilled workers). And these cuts only pay for the $1.5 trillion deficit increase as laid out in the plan – Congressional leaders have already announced intentions to cut Medicaid by 47%, job training by a third, and SNAP by $140 billion by the time temporary tax credits expire.

If this plan doesn’t sound like it would be popular, that’s because it’s not. A nationwide Fox News poll found 52% of Americans disapprove of the Republican tax plan, and only 25% support it. In Indiana, 80% of the 2017 Hoosier Survey respondents say corporations and the wealthy not paying their fair share are their top concerns with the federal tax system. The Senate plan does exactly the opposite of what Hoosiers and Americans want it to do. 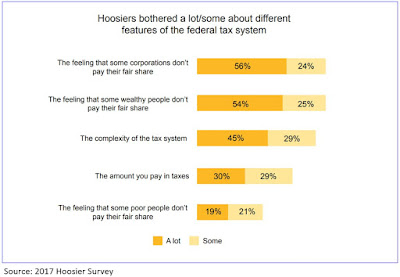 It’s crucial that Hoosiers reach out and hold their Senators accountable for the damage this plan will do to our middle-class and working families. Call Senator Donnelly and Senator Young at (202) 224-3121 and let them know how you and your family will be impacted by this upside-down tax plan. Tell them if they want real tax ‘reform’, it’s time to go back to the drawing board. This plan is so flawed that it would be far better to start over than to pass this plan as-is.
____________________________________________________________
Please donate to help us advocate for an Indiana economy that works for all Hoosier families
Share This