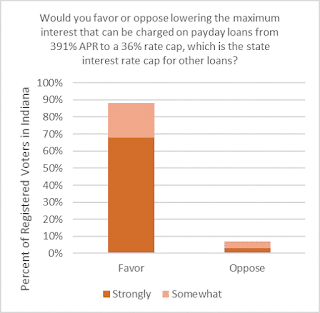 A new poll shows 88 percent of Hoosiers support a 36 percent rate cap on annual interest for payday loans, which currently carry up to 391 percent annual interest. Respondents also found payday loans to be harmful, expensive, and a financial burden to families.

The poll, conducted by Prosperity Indiana, Brightpoint, and Indiana Institute for Working Families in partnership with Bellwether Research, also found that 75 percent of Hoosiers would oppose seeing a payday loan store open in their neighborhoods, and 75 percent would be more likely to vote for a legislative candidate who favors lowering interest rates on payday loans to 36 percent.

Even so, Representative Burton (R-Greenwood), Chair of the Financial Institutions Committee, plans to give payday lenders a hearing on a bill that would not only expand payday lending, but also exempt a new set of subprime lenders from Indiana’s criminal loan sharking laws. The bill allows for increased rates and fees on a broader set of consumer loans.

As drafted, HB 1319 (Carbaugh, R-Fort Wayne):
·       Allows all consumer loans up to $54,600 to be subject to a 36 percent interest rate and increases fees like delinquency charges. Currently only loans of $2000 or less can charge 36 percent;
·       Triples the non-refundable prepaid finance charge lenders can tack on over and above this 36 percent rate - from $50 to $150 - and increases the number of times per year a lender can charge this fee to a borrower from two to three;
·       Exempts the non-refundable prepaid finance charge on installment loans from the current felony criminal loan sharking standard of 72 percent APR, allowing subprime loans to reach triple-digit APRs;
·       Protects the current two-week payday loan product at 391 percent APR;
·       Adds a new three-18 month installment loan product, called an “unsecured consumer loan,” exclusively for licensed payday lenders with the same high costs and debt trap features that characterize existing payday loans. A conservative application of language in the “unsecured consumer loan” chapter of the bill produces loans at around 200 percent APR. Depending on how fees and interest are applied, it could be even higher.

“These high-cost loans have devastating consequences for borrowers and for community stability. With Hoosiers expressing overwhelming support for a rate cap and efforts to reign in payday lenders’ abusive practices, you have to wonder why we would ever consider legislation to expand these products and increase fees instead,” said Steve Hoffman, President and CEO of Brightpoint.

Capping loans at 36 percent interest is the most effective way to stop the cycle of high-cost debt intentionally created by payday lenders. It is the rate the U.S. Department of Defense secured to protect active duty military members and 15 other states have implemented caps of 36 percent or less to protect borrowers from usurious loans. It allows wide access to credit without creating an incentive for a lender to seek out distressed borrowers who are unable to repay. The results of this poll are conclusive. Indiana voters believe 36 percent is the fix to these high-cost debt traps. 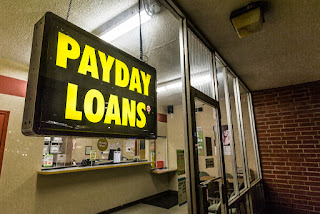 For more information, see the Indiana Institute for Working Families’ explanation for why 36 percent is the fix for small loans in Indiana as well as a factsheet and policy brief on payday lending. See also While praising federal payday loan rule, Indiana advocates call for further action from state lawmakers.