By Andrew Bradley, Senior Policy Analyst
The 2018 session of the Indiana General Assembly actually provided a few life preservers for working families before ending in chaos. But little was done to create the systemic improvements needed for nearly 1 in 3 Hoosiers left underwater economically. Let’s review the Institute’s agenda to ‘right the ship’ for working families, with items specifically chosen to be easily implemented even in the ‘short session’ with no budget bill. Then we’ll compare the agenda with the final tally of what the General Assembly accomplished in 2018, so policymakers know how to correct course in the future. 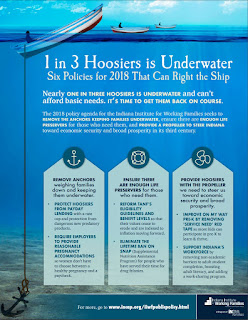 The first plank in our agenda was to “remove anchors weighing families down and keeping them underwater” by protecting Hoosiers from predatory lending with a rate cap, and by requiring employers to provide reasonable pregnancy accommodations so women don’t have to choose between a healthy pregnancy and a paycheck. But while 88% of Hoosiers support capping predatory loans and a bill (SB325) to do so attracted a bipartisan group of eight co-sponsors, it was not granted a hearing. Instead, a bill that would have created larger, longer payday loans at up to 222% APR passed the House before a wide-ranging coalition helped convince the Senate to not hear it, thus defeating payday expansion for the third year in a row. But as for the anchor of lack of pregnancy accommodations, HB1344 was filed but never given a hearing, leaving working mothers and their families-to-be vulnerable to health and economic dangers.

The second plank in the agenda was to “ensure there are enough life preservers for those who need them” by modernizing the state’s TANF benefits and eligibility, and by removing the lifetime ban on SNAP for people who have served their time for drug offenses. While SB79 had bipartisan support to bring TANF eligibility up to the level of ‘extreme poverty’ (50% of the federal poverty line) and to index benefits to the cost of living moving forward, it was not granted a hearing. However, after at least three years of effort, the SNAP language that began in SB11 was passed in HB1317 and will allow nutrition assistance for people with prior drug felony convictions. When the bill goes into effect in 2020, Indiana will no longer be among the last handful of states to deny nutrition assistance to these individuals.

The final agenda plank would help “provide Hoosiers with the propeller we need to steer us toward economic security and broad prosperity”. Even in a short session, the General Assembly could improve ‘On My Way Pre-K’ by removing ‘service need’ red tape so more kids can participate in pre-K to learn & thrive. HB1042 was filed and would have removed the work requirement to qualify for early childhood education, but wasn’t given a hearing. We also recommended supporting Indiana’s workforce by removing non-academic barriers to adult student completion, boosting adult literacy, and adding a work-sharing program. And while the work sharing program in HB1198 (stop us if you’ve heard this before) wasn’t given a hearing and while the ‘workforce reorganization’ promised will not revolutionize post-secondary education for low-income, low-skilled adults, it did provide several concrete steps forward. HB1002 includes new employer incentives for Work INdiana to connect adults without high school degrees to credentials and jobs; will expand employer training programs; and study whether the state should submit a 'Combined' WIOA plan to align the state's workforce programs across agencies. SB50’s new Governor’s Workforce Cabinet also reserved a spot for community-based organizations to represent low-income adults.

Every session brings opportunities for uncharted courses and a chance of storms. The Institute was happy to support two efforts that will expand occupational licenses for Hoosier DACA recipients (in SB419) and for people with records (in HB1245). We also supported SB142, a maternal mortality review committee, SR25 a resolution to study paid leave (again), and HB1065 a measure to increase broadband access in rural communities. The session’s clock ran out on a last-minute proposal in HB1316 that would’ve cut $500,000 annually from the state’s EITC starting in 2020. The proposal may reappear in a special session, where we hope the legislature will hold low-income families harmless in tax changes.

The small changes this session may keep some Hoosiers afloat, but still leave a third of our working families treading water at best until 2019 when the General Assembly has its next chance to set a new course for the state. In the meantime, Hoosiers are weighed down by increasing gender and racial wage gaps, and the lowest wages and least worker voice among all our neighbors. Between now and next year’s budget session, policymakers need to study the status of working families in Indiana and vow to either change course or walk the plank.
THANK YOU to all of our friends for your ongoing support this session and throughout the year. We spend a lot of time at the Statehouse with the General Assembly, meeting one-on-one with lawmakers, testifying on bills, and keeping close watch on all legislation to prevent nasty last-minute surprises. Your calls and messages made a crucial difference to encourage legislators to make the right choice for working families on several key pieces of legislation, and we wouldn’t have nearly as much good news to report without your help. Please encourage your friends to sign up for research updates and action alerts throughout the year, and please consider donating so our message can continue to have an impact for Indiana’s working families!