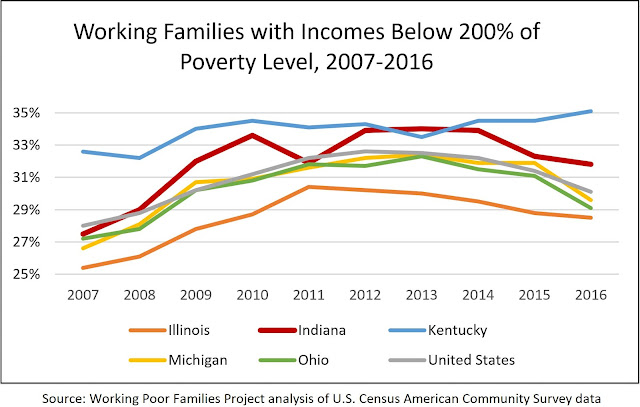 Work should not only be honorable and bring dignity, but should also pay for a family’s basic needs and provide opportunities to continue on a pathway to long-term economic security. But new data shows that a higher proportion of Indiana’s working families remain low-income compared to our Midwestern neighbors, particularly Hoosiers of color. Indiana’s per capita income also trails most neighbors, with income growth that lags behind the national average suggesting that without a new policy direction, working Hoosier families aren’t likely to catch up soon.

A new policy brief from the Working Poor Families Project finds that even with an unemployment rate nearly as low as before the recession, the proportion of Indiana families who are working or seeking employment and are also low-income remains well above the pre-recession rate.[1] In 2016, 31.8% of all working Hoosier families were below 200% of the federal poverty line, compared to 27.5% in 2007, when the state had only the 25th-highest rate. Indiana’s rate of low-income working families now ranks 19th-highest in the nation, above the U.S. median of 30.1% and above Illinois, Michigan, and Ohio. Indiana’s leaders have touted a business-friendly policy focus, and the state has set itself at the forefront for imposing new work requirements for social service programs for the poor. But despite similar economic conditions and costs of living, working Hoosiers are less likely than all neighbors except Kentucky to earn enough to afford basic needs, much less build skills and grow assets to thrive in the post-recession economy.

The brief finds working racial/ethnic minorities are also more likely to be low-income in Indiana than those in neighboring states, again except Kentucky. At 52.4%, Indiana has the 11th-highest proportion of low-income working families of color in the U.S. Working African American (54.2%) and Hispanic/Latinx (55.6%) Hoosier families are more than twice as likely to be low-income than their white (26.7%) counterparts. As the report finds “racial/ethnic minorities are not disproportionally low-income because of a lack of work effort, but because they are more likely to be working in low-paying occupations.” These occupations have dominated the economic recovery, including service-sector jobs with few benefits and erratic work schedules.[2] And partly because Indiana has put fewer policy guidelines on this growing sector of low-pay, low-quality jobs, the state’s proportion of low-income working families has remained comparatively high a result.

It will take more than work, and more than the policy status quo, for Indiana’s nearly 1 in 3 working poor families to get relief from stagnant incomes. New data from the U.S. Bureau of Economic Analysis shows that while Indiana’s income rank improved from #35 in 2016 to #34 in 2017, we are still outranked by all neighbors, again except Kentucky. Indiana’s per capita personal income of $44,165 is now $6,227 below the U.S. median of $50,392. Hoosiers earn 88% of the average American’s income, compared to 105% in Illinois, 90% in Michigan, 91% in Ohio, and 78% in Kentucky. Indiana’s income growth of 3% in 2017 was a tick below the national average of 3.1%, and not enough to surpass its Midwestern neighbors. And when taken together with high rates of low-income working families, this incremental aggregate growth of the personal sector will likely hold Indiana back unless its neighbors fall further by comparison.

With rates of incomes and working poor families still lagging nearly a decade after the recession, Indiana can’t wait for an invisible hand to help push us ahead of our neighbors. So how can the state regain ground as a Midwestern leader and begin to compete in the U.S. again? The WPFP brief recommends three steps to cut inequality: provide access to skills training, affordable child care, health coverage, and paid sick leave; enforce discrimination laws to reduce earning disparities; and expand opportunities and tax incentives for retirement savings.

To get ahead, Indiana should also abandon efforts to add more work requirement red tape to safety net and work support programs, so long as the jobs on offer pay less than what’s needed for self-sufficiency. The state must finally get competitive with our neighbors and lose the low-road mindset, as the General Assembly has left too many families treading water at best by refusing to advance wage and job quality legislation. But until this happens, there is much Governor Holcomb can do to take our economy ‘to the Next Level’ with a Good Jobs economic development strategy that focuses on busting barriers to training programs, linking employers and families with the supportive services they need to connect, and rewarding potential employers who commit to a proven high-road jobs strategy. Once Indiana takes these steps, it can claim a rightful place as a state that works for all Hoosier families.
_________________________________________________
[1] The brief defines a family as working “if all family members ages 15 and older either have a combined work effort of 39 weeks or more in the prior 12 months, or all family members ages 15 and older have a combined work effort of 26 to 39 weeks in the prior 12 months and one currently unemployed parent looked for work in the prior four weeks."