2017 Census data reveal some Hoosier gains worth celebrating, but still work to be done - particularly for Hoosier women, as the gender pay gap now 3rd-widest in the U.S.

New Census data show that in 2017 Indiana continued to make incremental progress toward getting back to the trajectory our state was on before the recession. There truly is reason for modest celebration of significant declines in poverty overall and, for many different groups, significant increases in educational attainment and median household incomes. However, while we are making more progress on these measures than we have before the trends we laid out in our recent report 'The Status of Working Families in Indiana, 2018' hold true, we haven’t caught up with ourselves before the recession and we still haven’t recovered as well as some of our Midwestern neighbors.

Three indicators in particular are troubling and show where Indiana should focus its efforts moving forward: our gender pay gap has widened AGAIN this year and was the 3rd highest gap in the United States in 2017; housing insecurity among Hoosier renters remains shockingly and stubbornly high; and finally a decline in health insurance coverage should serve as a cautionary tale for the state not to restrict access any further.

Poverty:
Indiana's poverty rate decreased significantly from 14.1% in 2016 to 13.5% in 2017, just a tick above the new U.S. rate of 13.4%. There are now 871,247 Hoosiers in poverty, down from 906,077 in 2016. This is great news, as we should all be working toward a goal of no Hoosiers in poverty. Indiana is now just a bit over a percentage point away from regaining our 2007 rate of 12.3% However, we still have further still to go to regain the 10.1% rate Indiana had back in 2000 when we were experiencing an economic peak. More progress needs to be made for Hoosier adults, whose poverty rate didn't drop significantly, and for Hoosier seniors, whose poverty rate remained flat at 7.7%.
Indiana’s rate of Child Poverty dropped to 18.4% in 2017 down from 19.5% in 2016 - but unlike poverty overall the Census says this decline is not statistically significant. While Indiana's drop in overall poverty in 2017 was significant, this seems to be driven by families with older children - those with kids under 5 did not see a significant change. This speaks to the needs for more supports for families with young children, including broader access to childcare or pre-K as well as childcare tax credits.
The new Census data from 2017 matches the trend in Indiana’s child poverty from our recent ‘Status’ report. Indiana’s child poverty rate used to be well below the U.S. and even the Midwest as recently as 2004, but spiked higher shortly thereafter and, at 18.4%, is now tied with the U.S., and is 2.7 points above the Midwest and 3.1 pts below the South. 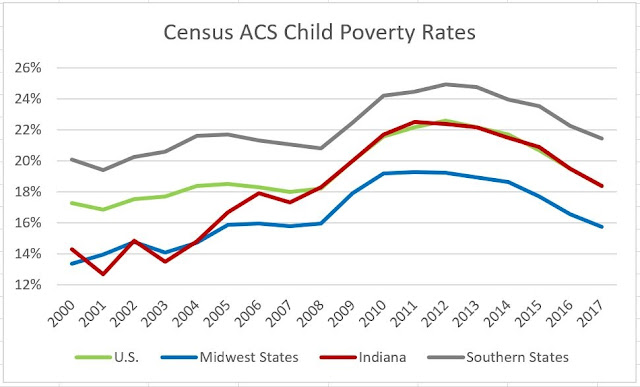 We know from our research on the Indiana Self-Sufficiency Standard that poverty-level income itself is not nearly enough for Hoosier families to afford life’s basic costs, so we look at how many Hoosiers are living below 200% of the federal poverty guidelines as well. In 2017, Indiana's rate of low-income residents was 31.5%, with 2,034,305 Hoosiers now living below 200% of the federal poverty line. This is down from 32.4%, or 2,086,942 low-income Hoosiers in 2016. But the rate of nearly 1 in 3 Hoosiers unable to afford basic costs is still way too high. And despite continuing signs of improvement, the percent of low-income Hoosiers is still above pre-recession level of 29.6% in 2007. Since 2009, basic costs have increased 31.9% for Hoosier families with children while wages have increased only 6.3%.

Among these costs, housing insecurity is a particular concern, especially for the nearly 1 in 3 Hoosiers below self-sufficiency. In 2016, 46.1% of Hoosier renters paid more than 30% of household income on rent, a key measure of housing burden. And while this statistic of rental housing insecurity decreased to 45.7% in 2017, the Census Bureau did not deem this decrease as statistically significant.  Affordable housing continues to be a fervent need expressed by our communities, as three cities in Indiana are among the highest in the country for evictions, waitlists for public housing assistance are too long, and affordable housing is out of reach for many low-wage earners. Asset development and home ownership programs could be part of the solution. Hoosiers who own their home are much less likely to be housing insecure.  About 19% of those with a mortgage in 2017 paid 30% or more on housing costs, campers to 9.9% of those without a mortgage. Much less than renters!  The changes from 2016 to 2017 were mostly static.

Household Income and Pay Gaps:
Like the U.S. overall, median household incomes increased significantly in Indiana, from $53,342 in 2016 to $54,181 in 2017. But the gap between the average Hoosier's and the median American's income also increased, from $5,478 to $6,155. And while Indiana’s income increase of $753 is undoubtedly good for working families, it didn’t keep pace with the increase of $902 for the average Midwest state. 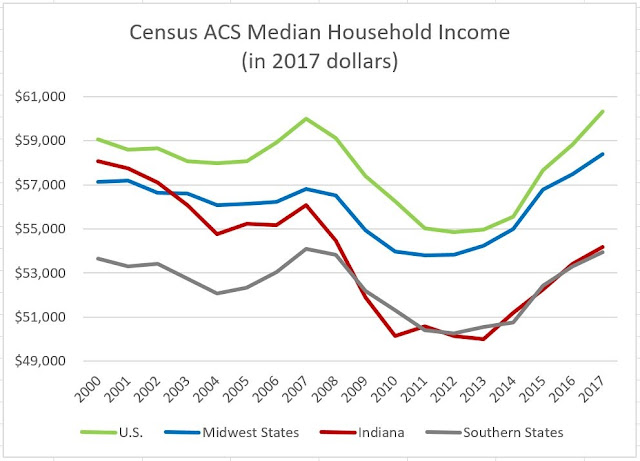 Even with 2017’s laudable gains, Hoosier households are still $2,052 shy of their pre-recession levels ($56,233 for 2007, adjusted for inflation to 2017 dollars). And Indiana would need 6 years at its current pace of income growth to catch up with the Midwest average – assuming the rest of the region saw no increase over that time. 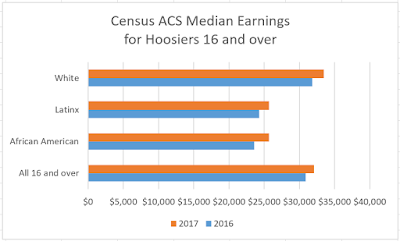 Health Insurance Coverage:
We were concerned to see that Indiana's rates of health insurance coverage decreased and uninsured rates increased slightly in 2017 after years of gains. The child uninsured rate increased from 5.9% to 6.3%, and the uninsured rate for working-age population of 19-63 increased from 12.3% to 12.8%.  This is a warning sign that perhaps now is not the time to make big changes to the way Indiana covers the healthcare needs of low-income Hoosiers. 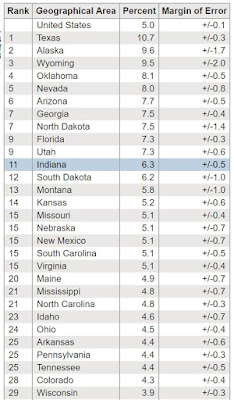 Educational Attainment:  In 2017, Indiana saw statistically significant increases in Hoosiers with Associate Degrees, and Bachelor's degrees, and significant declines in the rate of Hoosiers who only have a high school degree or less!  These are promising gains for Hoosiers looking to increase their educational attainment, and for employers who increasingly demand a higher-skilled workforce.
The safety net:
New Census data shows that fewer Hoosier households were enrolled in SNAP over the past year - down from 10.8% in 2016 to 9.3% in 2017.  SNAP is designed to respond to need, so as Indiana saw earnings rise, it makes sense to see a decrease in households using nutrition assistance. However, in 2017 8.7% of households who were NOT receiving SNAP were below the poverty level. This may mean Indiana is still not reaching the Hoosiers most in need those SNAP was intended to serve.

Furthermore, Indiana saw a non-significant decline in the rate of Hoosiers in deep poverty (below 50% of FPL). We are calling on the General Assembly to make much-needed changes to our state’s Temporary Assistance for Needy Families program so that it can better serve our most vulnerable citizens.
Conclusion:
In conclusion, in 2017 Indiana saw further incremental improvements that track the ongoing national recovery. But even these uneven gains are leaving too many vulnerable residents behind, including women, Hoosiers of color, and low-income working families. As median incomes fall further behind our Midwestern peers and Hoosier women now face the 3rd-highest gender pay gap in the nation, Indiana can’t afford to keep waiting for piecemeal efforts to kick in. To truly catch up and become a leader in the Midwest and the U.S. again, Indiana needs its policymakers to take bold steps to improve wage and job quality, strengthen protections, and increase economic mobility for all Hoosier families.