When the Indiana Commission for Women hosted listening sessions around the state in 2011-12, work-based issues and caregiving surfaced as key issues. In response, the Commission engaged three research teams to explore the feasibility of guaranteeing paid family and medical leave to workers in the Indiana. The results, presented Wednesday at a research symposium, showed strong support for paid family and medical leave and a clear path forward that would not only benefit Hoosier families, but the economy as well.

Lake Research Partners surveyed 600 Hoosier adults, finding that 74 percent support a statewide program to guarantee access to paid family and medical leave, with 63 percent strongly supporting such a program when they know it would cover paid leave to care for a newborn or newly adopted child, a seriously ill family member, or for their own serious health condition. All demographic, regional, and political groups support the establishment of a paid leave program. In terms of program design, Hoosiers prefer that employees qualify for the benefit by working at least 680 hours in a given year and that employers and employees share the cost of such a program.

Perhaps what was most interesting were some of the findings from qualitative interviews with Hoosiers. Many recognized paid leave as a common sense policy:

“I’m just thankful that Indiana’s considering this, and realizing the importance of it. And I think that family medical leave is very important. A very important benefit that we do need to be considering.” – White Conservative Woman, 59, Andrews

Those that had caregiving experiences were especially likely to support movement on this issue:

“So, it’s really difficult because I’ll admit, I’m actually in this situation right now. I’ve had to take time off working altogether because I’m taking care of my disabled mother and we only have one income now, and it’s extremely hard. We can’t even buy something sometimes, and we live paycheck to paycheck, which only comes once a month. A lot of the time, we don’t even know what we’re gonna do as far as eating goes.” – White Liberal Man, 27, Middletown 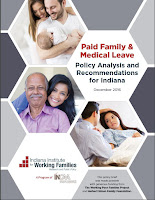 And while some expressed reservations about whether or not government should step into this space or about potential negative repercussions for businesses, others echoed the findings in our 2016 report, Paid Family and Medical Leave: Policy Analysis and Recommendations for Indiana suggesting that there could be value not only for working families, but for businesses and the economy:

“When you lose a job it has a domino effect. It doesn’t just affect you and your family and your house. It affects the economy. It eventually hurts everybody.” –White Moderate Man, 49, Martinsville

“A happy and healthy employee is a good employee. For us, you have to take your business seriously, but you also have to take the health and welfare of your employees seriously.” –White Liberal Woman, 52, Fort Wayne

In short, the findings suggest that Hoosiers are ready to walk down this path. Audience members at the symposium seemed enthusiastic as well, zeroing in on other potential benefits as well – such as reductions in infant mortality and child abuse, increases in breastfeeding and postpartum care, potential cost savings for employers that already offer paid leave, and a more level playing field for recruitment and retention at small businesses. They recognized Governor Holcomb's leadership on this issue. So while some see our state’s focus on being business friendly as a reason to doubt that Indiana policymakers will take action, many seem prepared to assert that enacting a paid family and medical leave program could be a win-win-win for families, businesses, and the economy. With so much promise, it’s time we explored the possibilities.