New Analysis: Indiana’s Tax System is Among the Dozen Most Regressive in the Country

New Analysis: Indiana’s Tax System is Among the Dozen Most Regressive in the Country
Low-Income Hoosier Taxpayers pay 53% more as a share of their income in state and local taxes than top 1% of taxpayers

By Andrew Bradley, Senior Policy Analyst
A new study released today by the Institute on Taxation and Economic Policy (ITEP) and the Indiana Institute for Working Families finds that Indiana’s state tax structure is among the dozen most regressive in the nation, with the lowest-income Hoosiers paying 53% more as a share of their income in state and local taxes compared to the state’s wealthiest residents.

The study, Who Pays? A Distributional Analysis of the Tax Systems in All 50 States evaluates all major state and local taxes in each of the 50 states, including personal and corporate income taxes, property taxes, sales and other excise taxes. The analysis reveals that, in addition to being among the dozen states with the most-regressive state tax structures, Indiana taxes its low-income residents at the 8th-highest rate in the country, and second-highest in the Midwest. ITEP finds that the lowest-income 20 percent of Hoosiers contribute 12.8 percent of their income in state and local taxes—considerably more than any other income group in the state.

"The wealthiest Hoosiers have benefited most from our growing national economy. It’s not unreasonable to ask the highest-income residents and corporations to pay their fair share of state and local taxes,” said the Indiana Institute for Working Families’ Senior Policy Analyst Andrew Bradley. “Combined with lower wages compared to our Midwestern neighbors, Indiana’s regressive state tax structure is fueling increased inequality and prevents working Hoosier families from having the same economic opportunities that previous generations used to rely on,” Bradley said.

Indiana’s state tax system is regarded as regressive because the lower one’s income, the higher one’s effective tax rate. This is in part because Indiana, like most other states, relies more heavily on sales and excise taxes to raise revenue, has a flat personal income tax, and offers relatively few tax benefits for low-wage workers. The lowest-income Hoosiers who earn $11,400 on average per year, pay 12.8% of their incomes in state and local taxes, the 8th-highest taxation rate in the U.S. on the lowest earners, and 2nd-highest in the Midwest. Among the next-lowest quintile of Hoosier taxpayers, with an average income is $27,800, state and local taxes are the 6th highest nationally and, on average, account for 11.3% of their income. But in comparison, the wealthiest 1% of Hoosiers, with an average income of $1 million, contribute just 6.8% of their income in state and local taxes. Compared to the rest of the country, Indiana’s state and local tax levy on the top 1% is the 24th lowest (or 28th highest).
To pay for state and local government services, Indiana derives 42% of its tax revenue from sales and excise taxes—significantly above the national average of 35 percent.Sales and excise taxes are a particularly regressive burden on working families, taking up 7.1% of family incomes for low-income Hoosiers, compared to just 1% for the wealthiest earners.

The new ‘Who Pays?’ analysis follows the Institute’s August report ‘The Status of Working Families in Indiana, 2018’ which found the wealthiest Indiana earners have received an extra $2,446 from combined state income, corporate, and fuel tax changes since 2012, while taxes for the bottom 60% of middle class and working families have increased by an average $36. The report found these upside-down state tax changes have occurred in an era when inequality increased at a faster rate in Indiana than in the Midwest and the U.S. overall, while Hoosiers’ hourly wages fell from near the middle of the Midwest in 2001 to second-lowest by 2017. 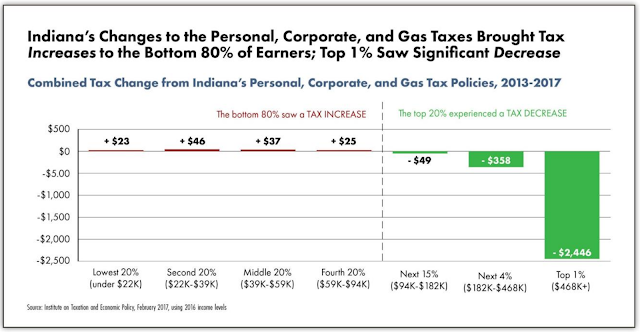 While Indiana should be praised for having a state Earned Income Tax Credit, this year the General Assembly voted to reduce the value of our EITC, effectively raising taxes on low-income working families by $5 million annually starting in 2027. Starting in 2019, Indiana can begin making its tax system fairer by recoupling the state EITC to the federal credit and holding low-income working families harmless to EITC changes. To make long-term progress, Indiana needs to reverse the changes that have made the state’s tax system even more regressive and which exacerbate inequality and income problems for working Hoosier families. Indiana could also take proactive steps to make its tax structure more working family-friendly, including joining the 25 states with a child and dependent care tax credit.