Could SB 613 be any worse? Probably not. 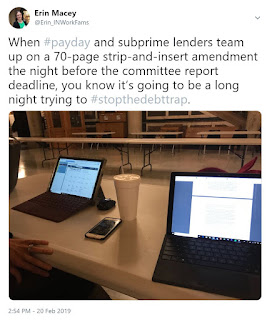 After stripping the original bill and inserting a 69-page amendment containing radical changes to our consumer lending laws, the Senate Commerce Committee passed SB 613 on to the senate floor 8-2 on Thursday, just before the committee report deadline. The amendment was released to members around 4pm the day before the hearing. Indiana Institute for Working Families obtained a copy from the committee chairman at 4:09pm, and spent much of the evening analyzing the bill in preparation for the 10am hearing.
What we found is horrifying. While typically we would take time to verify our interpretations of lending bills with state regulators, the fact that this bill could move through the Senate by Tuesday afternoon suggests we cannot take the time to do so, so we publish the following with acknowledgement that it reflects our best understanding of the bill as written and leaves out a number of changes in the bill we have not had have time to analyze.
Quick summary:

FOR A MORE DETAILED ANALYSIS OF THE BILL, CLICK HERE.

The lenders backing this bill target low-income borrowers, charging eye-popping interest rates and/or packing loans with credit insurance and fees that drive up the cost. Doing this allows lenders to profit even when a borrower ultimately fails, because as long as the borrower makes several payments or renews the loan several times, the lender will have recouped more than he originally put forward and then some. The lender walks away flush, and the borrower experiences the cascade of financial consequences that defaulting on a loan incurs.
This alone should be sufficient to render these bills dead on arrival. However, there is also the bigger picture in which loosening of our lending laws would occur – one that should make us all concerned about the consequences of increased subprime lending. This year, national household debt has peaked $13.54 trillion - $869 billion higher than its peak in the third quarter of 2008. Non-housing-related balances are growing, with rising auto loan and credit card balances. Outstanding education debt has tripled over the last decade. In other words, households are already swimming in debt, and many borrowers are now showing signs of distress.
One in three Hoosiers has a debt in collections. The number of individuals 90+ days late on auto loans just ratcheted up, especially among people under age 30. Many see this as a red flag for our economy, as making payments on auto loans is typically a priority for households. Meanwhile, many of these same younger borrowers are also struggling with student loan payments – and if current trends continue, nearly 40% of borrowers are expected to default on student loans by 2023.
On the other side of the spectrum, older Americans are more likely than ever to find themselves in bankruptcy court - their rate of bankruptcy has increased between 200 and 300 percent since 1991.[1] Older Americans are also the fastest growing group of borrowers with student loan debt. Meanwhile, the median retirement savings among all working individuals is $0.00.
Declaring bankruptcy, having delinquent debt or debt in collections, and overextending the credit a borrower has available all land borrowers in the lower end of the credit spectrum. In other words, when lobbyists in our statehouse talk about their lenders' ability to lend to individuals who have damaged credit, what they mean is extending high-cost credit to individuals who are underwater financially or who have recently experienced significant distress through lending practices that allow thelender to be successful even when a borrower ultimately defaults.
It is bad public policy to allow this to happen. Statehouses set the limits on non-bank financial institutions’ practices. It is a weighty responsibility, and one that has the potential to help or harm many individuals. Rather than pile more and higher-cost debt on Hoosiers’ already-precarious balance sheets, we need to tell our state lawmakers to reject the dangerous proposals in SB 613 and begin making choices that will actually support the financial well-being of Hoosier consumers and our economy.

HOW YOU CAN TAKE ACTION:  SB 613 could be up for its final vote in the Senate AS EARLY AS TUESDAY, February 26, 2019.  Call your state Senators NOW and ask them to vote NO on SB 613.  Tell them that Hoosiers DO NOT WANT higher cost borrowing that exists in SB 613 but instead we want the consumer protections found in SB 104.