This is not a drill...FOUR ALARM FIRE on High Cost Lending! 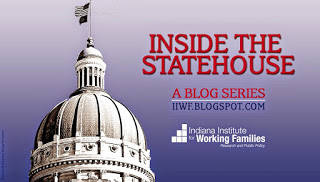 As the legislature prepares to send over bills to the opposite chamber and the 2019 General Assembly session reaches its halfway point, the Indiana Institute for Working Families has seen significant progress on a host of issues that affect the economic well-being of working families in Indiana. However, there is still work to be done and ways that you can support key issues like TANF modernization and a 36% payday rate cap, and MOST IMPORTANTLY THIS WEEK: help stop an aggressive predatory loan product expansion. The fate of several bills will be decided Monday and Tuesday. On Monday, the House goes into its session at 10 AM and the Senate goes in at 1:30 PM.


We are going to start with the most pressing news that needs your advocacy urgently! The Institute is shocked by the passage of SB613 out of the Senate Commerce and Technology committee on Thursday, February 21, 2019 with a vote of 8-2. Lawmakers stripped the bill and inserted a 69-page amendment that was only made public at 4pm the night before the committee hearing. It has disastrous consequences for Hoosier consumers. Senior Policy Analyst Erin Macey described for lawmakers what was in the bill, addressing the many issues and answering questions from the committee with the knowledge base we have developed over years of research. Many coalition members testified in opposition to the bill as well. IIWF posted a blog earlier this weekend with a summary of the details of SB 613 as it passed out of committee.  The bill could receive its final Senate vote and move on to the House on TUESDAY, February 26, 2019.  CALL YOUR SENATORS and BEG THEM TO VOTE NO ON HIGHER COST BORROWING!