Are We There Yet? No, We're Not Even Close. 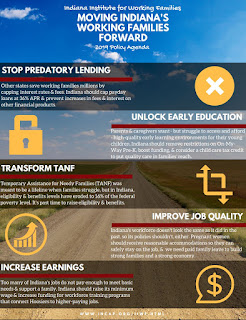 If you’ve ever been on an exciting road trip, you know how Institute staff felt at the beginning of session. With a roadmap, a full tank of gas, and all the eagerness the vision of a really great destination inspires, we set out to steer several promising pieces of legislation through the process. And for the first few miles, the trip went better than expected – but those giddy early days turned to dismay as roadblocks and detours stalled forward progress. By mid-session, instead of cruising happily toward a better future for working families, we found that the General Assembly had rerouted working families toward a cliff of high-cost debt. And while we can consider stopping that nightmarish outcome as a victory, the sad reality is that we still have a long way to go to reach our destination. 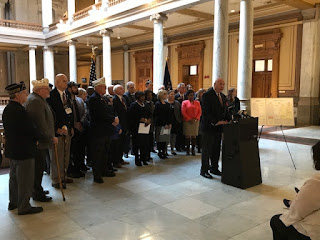 STOP PREDATORY LENDING: The Institute’s top priority this session was to stop predatory lending, and an early hearing on SB 104 (Sen. Walker, R-Columbus, with nine coauthors), which would cap payday loans at 36% APR, seemed like an encouraging sign of progress on the issue. But the day after SB 104 passed out of the Senate Insurance & Financial Institutions Committee, a strip-and-insert amendment containing a massive expansion of payday and subprime lending appeared in SB 613. That bill outpaced SB 104, securing 26 votes to pass the Senate. And following some tinkering through another last-minute amendment, it moved to the House floor. Thanks to the efforts of a strong, diverse coalition, SB 613 couldn’t secure enough votes to cross the finish line.

UNLOCK EARLY EDUCATION: As Institute staff testified on HB 1628 (Rep. Behning, R-Indianapolis with three coauthors and five Senate sponsors), access to high-quality early learning opportunities is first and foremost about their benefits to children, but they also have the added benefit of allowing families to seek and secure employment. Unfortunately, the General Assembly declined to take action on HB 1288 (Rep. Hamilton, D-Indianapolis with coauthor Rep. Beck) to create a state-level child and dependent care tax credit and put high-quality care within reach for more families, and an earlier version of HB 1628, the prekindergarten eligibility bill that offered a wider exemption from the work requirements currently imposed on families, was narrowed to exempt only families receiving Social Security and Social Security disability insurance payments. HB 1628 did, however, make families all across the state eligible for the program and we're grateful to see a broader group of four-year-olds will be eligible through the carve-out for grandparents and parents with disabilities.

TRANSFORM TANF: Temporary Assistance for Needy Families is sorely in need of an update.  If we were road tripping the last time TANF benefit levels we updated (1988), we'd be listening to George Michael's "Faith" on the car radio. Under SB 440 (Sen. Ford, R-Terre Haute with seven coauthors and four House sponsors), eligibility guidelines would have moved to 50% of the Federal Poverty Guidelines, which is the threshold for deep poverty, and benefit levels would have increased by about 60%.  We know that this program is serving our most vulnerable citizens, but we also know that there are more Hoosiers who could benefit from the services TANF can provide.  Hoosiers living in deep poverty face a lot of barriers to employment and to self-sufficiency. There is great potential in TANF with its blend of case management, work participation, job readiness services, child care & transportation benefits to be a real catalyst for extremely impoverished families to get a good start on the road to economic self-sufficiency.  Despite some great strides - passing both the FULL Senate and the House Family & Children committee unanimously - the bill did not get a hearing in the House Ways and Means Committee and died for failure to progress before a committee report deadline.

IMPROVE JOB QUALITY: While unemployment in Indiana remains low, the wages and benefits offered to many Hoosier workers leaves much to be desired. Few families have access to benefits like paid family leave, and pregnant women needing reasonable accommodations like extra bathroom breaks, temporary relief from heavy lifting, or other modifications lack protections. HB 1302 (Rep. Shackleford, D-Indianapolis with two coauthors), which would have created a paid family and medical leave program to provide six weeks of paid family and medical leave, and HB 1073 (Rep. Engleman, R-Corydon with three coauthors) and SB 590 (Sen. Becker, R-Evansville with two coauthors), which would have clarified that pregnant women can seek reasonable on-the-job accommodations. Sadly, none of these bills received committee hearings.


PIT STOPS ON THE SCENIC ROUTE: Often, issues arise that weren't on our road map prior to  session. This year, one of those was HB 1495. Authored by Rep. Summers (D-Indianapolis), Rep. Clere (R-New Albany) and Rep. Fleming (D-Jeffersonville), HB 1495 created some common-sense disclosure and transparency measures around land contracts for principal dwellings. IIWF supported this bill alongside partners Prosperity Indiana and Fair Housing of Central Indiana, trying to move this legislation to the Governor's desk. It nearly made the finish line, but when the bill was taken up for a final vote in the Senate on sine die, it failed 20-30.

A small victory this session was HB 1141 (Rep. Shackleford, D-Indianapolis), a bill addressing the traffic and license reinstatement fees that keep people off the road or force them to choose between driving illegally or losing their jobs, childcare, education, etc. This bill provides for a temporary amnesty program where fees can be reduced by 50 percent. WFYI notes that an estimated 185,000 drivers could be eligible for reduced penalties. This bill literally helps people get back on the road to self-sufficiency.

GETTING BACK ON THE ROAD: At a time when far too many families are struggling to afford the basics, are weighed down with debt, and have little set aside to weather a financial shock or retire with dignity, it is unfortunate that policy priorities that would boost their financial well-being took a backseat to other issues. But the struggles of many Hoosier families' to balance their budgets mean that we cannot allow detours and setbacks to keep us from pressing forward. Following a few deep breaths, Institute staff will be back behind the wheel trying to navigate the state toward broader prosperity. We hope you'll join us for the ride!