Jessica Fraser: A Crisis of Our Own Making

The Indiana Institute for Working Families has been studying the conditions of poverty and what it takes to be economically self-sufficient for longer than my 11-year tenure here.  In fact, we have been commissioning the Self-Sufficiency Standard for Indiana from the Center for Women's Welfare since 1999.  We spend a lot of time thinking about wage adequacy and how far off the mark our current poverty thresholds (and guidelines) are for giving an accurate account of the number of families struggling to get by in this country.

So it goes without saying, we are distressed by a recent OMB proposal to change the current inflation measure for the poverty thresholds from the Consumer Price Index (CPI-U) to the Chained Consumer Price Index (C-CPI-U).  Slowing down the growth of an already inadequate measure makes no sense and does not show concern for the lived experience of struggling American families. In other words, we’re changing the yardstick by which we measure poverty so that fewer people get counted.

The poverty thresholds as they are currently calculated are inadequate in a few very important ways.  First, they are based on the cost of a single category of basic needs: food.  When our definition of poverty was created in the 1960's, food costs were the only data that was really available. We knew that families spent about 1/3 of their budget on food, so it was a simple matter of multiplying by 3 to get a total household budget. However, this methodology has remained stuck in the 1960s.  It is no longer the case that families spend 1/3 of their budget on food. In fact, the Bureau of Labor Statistic's Consumer Expenditure survey finds that Americans spend only about 13% of their income on food. As a result of this antiquated methodology, the poverty thresholds do not take into account the rising costs of necessities such as housing or health care (rising more rapidly than food, it should be noted) or to the introduction of new categories of necessities, namely the high cost of child care. Child care is not a luxury, but a necessity for working parents in today's world. 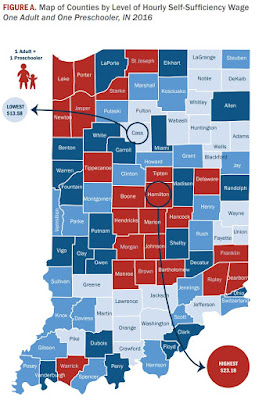 Another complaint about the current poverty threshold is that, aside from Alaska and Hawaii, it does not take into account differences in geographic locations. It is the same whether you live in New York City, New York or Tell City, Indiana. This is a major shortcoming when you think about the cost of living differences from state to state. Even WITHIN Indiana, there is a wide variance of cost differences leading to some fairly big differences in self-sufficiency standards throughout the state (holding family type constant).

Given the inadequacies of the current measure coupled with the fact that changes do not address the real challenges of the measure and actually put it further out of touch with reality, using Chained CPI to determine the poverty threshold is the wrong policy direction!  Defining people out of poverty by methodology alone, and not because situations have improved for American families, is ill-informed and irresponsible.


What's wrong with Chained CPI?
The problem with using the Chained CPI specifically with the poverty thresholds is that it grows more slowly than the regular consumer price index. The Bureau of Labor Statistics has a great explanation in this video. This may make some sense in the aggregate when you are speaking about the whole economy, but even in the BLS video linked above, the narrator is careful to point out that this is a measure averaged across all consumers and may not reflect the actual inflation rate for individual families or certain specific groups of people.  In its statement on this proposal, the Center on Budget and Policy Proposals links to a recent study indicating that "inflation tends to rise faster for low-income households than for the population as a whole."  Our own research bears out this concept. In our most recent edition of the Self-Sufficiency Standard for Indiana 2016, we found that our self-sufficiency standard for basic needs only (we took the tax credits out) grew considerably more than the Midwest CPI over the same time period, indicating that current inflation measures already underestimate the costs of basic needs. This is particularly concerning since for low-income families, nearly all of their spending falls into this basic needs category.  Our analysis also suggests that "assuming that the CPI reflects the experience of households equally across the income spectrum hides the lived experience of those at the lower end." (pg. 15).
​ 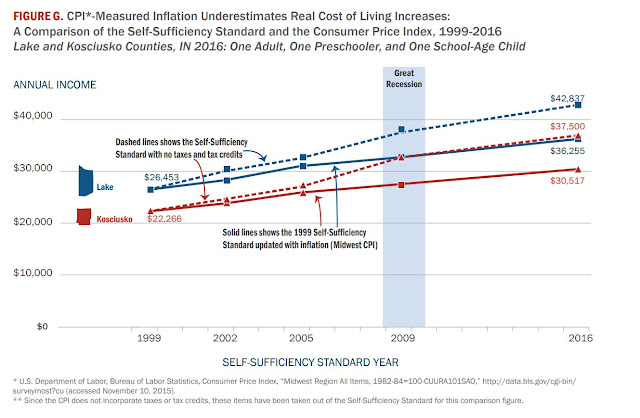 So to reiterate, the changes we need to make to the poverty measure go well beyond what inflation adjuster we use to adjust the measure each year.  AND we should be looking at data to show us what the actual inflation rates might be for this specific family and not assume that low-income families can make the same choices that the average consumer in the Chained CPI can make. As Talk Poverty put it in their recent blog "for many families who are already choosing between paying the rent and buying food, they are already living as frugally as possible."

Why does this definition matter so much?
This is not just a question of semantics!  The poverty threshold is used to determine the Department of Health and Human Service's "Federal Poverty Guidelines (FPG)."  These guidelines are enormously important as they determine eligibility for nearly every program that helps low-income families nationwide.  And while many of our poverty-fighting programs use a multiplier of the poverty guidelines (e.g. eligibility for SNAP is 130% of FPG, eligibility for WIC is 185% of FPG), the proposed change will have the effect of making some families who would have been eligible under the previous system of adjusting inflation, no longer eligible, cutting them off from the support they need to get back on their feet.  Changing the inflation adjustment method will not only result in failing to count vulnerable Americans, but worse, it will result in failing to give them a hand up when times are tough.

Choosing to not count these folks in our federal poverty measure and to not serve them doesn't make them cease to exist. They will still be there in our communities, struggling more, with fewer resources to put back into their local economy.  And while in the near term, the effects seem very small, this type of change compounds over time, meaning that down the road it will have larger and more far-reaching consequences that will continue to ripple through our economy. And worst of all, it will be a crisis of our own making.

IIWF will be submitting public comments in response to the OMB proposal and we will be encouraging all of our partners and followers to do the same.  The Coalition for Human Needs has created a portal to make submitting a comment letter very easy. Click here to submit yours!
Share This