The Hoosier mom who returned to a cubicle while her infant struggled for survival in the NICU, the dad whose son lay sick in a hospital bed while he worked overtime, and the exhausted caregiver who drove daily from work to her aging father’s home and back again might take comfort in the fact that members of the U.S. House Ways and Means Committee seem to agree on one thing: Congress should be working to expand access to paid family and medical leave. The committee met on Wednesday, May 8th to hear from a panel of experts on the issue. But the committee members’ questions revealed a divergence of opinions on solutions, raising concerns about the likelihood that Congress can find a path to achieve the shared goal of ensuring that more families could find relief from the inhumane situations they currently experience. 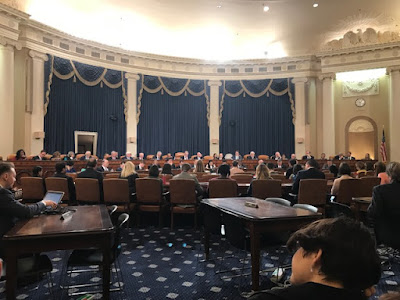 Panelists at the hearing spoke to the lessons learned from both the status quo and from existing state-level solutions:

Marisa Howard-Karp shared her personal story of struggling to care for her aging parents, including her father who had suffered from a stroke. “We were terrified about their health and our financial security,” she told the committee, noting that paid family leave would have alleviated at least some of the burden during that stressful time.

Anthony Sandkamp, a small business owner from New Jersey, spoke about the hiring disadvantage he faced prior to New Jersey’s implementation of a state-level paid leave program, and discussed the turnover cost associated with losing a key employee when the employee’s mother was battling cancer. “Replacing employees is expensive, with turnover costs estimated to average one-fifth of an employee’s annual salary,” Sandkamp stated. New Jersey’s paid leave program made offering the benefit “simple and affordable,” he told the committee.

Pronita Gupta, Director of Job Quality at the Center for Law and Social Policy, shared lessons learned from state-based programs, including that we would likely see reduced costs to our social safety net as more families remain economically stable and caregivers are able to reduce the need for nursing home placements. “Evidence also shows that effective access to paid family and medical leave can improve the health of mothers and children; reduce racial disparities in wage loss between workers of color and white workers; improve employer experience by improving employee retention and reducing turnover costs; and increase women’s labor force participation, which can lead to greater economic security for a family and strengthen the overall economy,” she shared.

Suzan LeVine, Commissioner at the Washington State Employment Security Department, discussed the bipartisan program developed in Washington State, where small businesses may also take advantage of grants to help with training costs and higher wage replacement will be offered to lower-wage workers.

Rachel Greszler, Research Fellow at The Heritage Foundation raised concerns about tapping Social Security to fund leave and about accessibility for low-income workers. 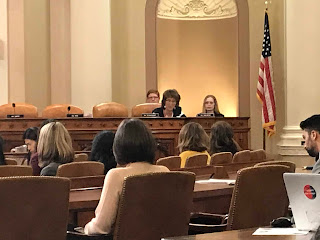 When her turn came to question the panel, Representative Jackie Walorski (IN-2), the only member of the Indiana delegation to serve on the committee, expressed a desire to see broader access to paid family leave, but seemed to dismiss the idea of a national program. She instead raised the idea of using savings accounts, presumably similar to a Health Savings Account or 529s. However, this concept has been criticized for offering little meaningful help to low- and middle-income earners. As Abby McCloskey, economist and member of the AEI-Brookings Joint Working Group on Paid Leave has pointed out, “tax-advantaged savings accounts are widely underutilized and skewed to the well-off.  Only a third of workers save for retirement in 401(k)s, according to Census data, and an even smaller percentage invest in HSAs. One reason is that these accounts are designed to benefit those with a federal income tax liability. Additionally, low-wage workers tend to have less disposable income to set aside for weeks without pay, even if the tax shield were applicable say to payroll taxes. Some have proposed that charities or employers could seed the accounts of low-wage workers. But this is not widespread practice today and it’s hard to see how existing incentives would change with this proposal.”


As the conversation on how to meaningfully expand access to paid leave continues, the Indiana Institute for Working Families will continue to host community conversations throughout the state to understand the needs of Hoosier families and businesses, as well as to highlight the potential benefits of expanded access and the costs of doing nothing. We will also continue to monitor policy proposals for the following key features:
·       Is it inclusive? A paid leave program that only serves new parents will leave out three out of four individuals who currently take leave under the Family and Medical Leave Act. A car accident or cancer diagnosis should not drive a family into poverty. At the same time, family caregivers, the backbone of our eldercare system, should receive sufficient support to continue their important work serving our nation’s aging population. An optional program or tax incentive will leave many out – or, as Rep Larson stated, “Our concern when you say flexibility is it means flexibility to do nothing.” We are looking for a paid leave solution that covers all workers for all of the major reasons people take family and medical leave.
·       Is it portable? In today’s economy, workers will likely change jobs many times. In fact, according to the Bureau of Labor Statistics, individuals born between 1957-1964 held an average of 11.9 jobs from age 18 to age 50, with nearly half held before age 24. When offered by a particular employer, a paid leave benefit generally requires a worker to achieve a certain tenure. But when state run, paid leave benefits can be portable from job to job, or workers can layer hours from multiple jobs to qualify for leave. We are looking for a paid leave program that allows workers to carry their earned benefit from job to job.
·       Is it accessible to low-wage workers? Early iterations of state paid leave programs offered flat wage replacement levels that made it difficult for low-wage earners to meet their basic needs while on leave. As Suzan LeVine noted in the hearing last week, “A minimum wage worker with family responsibilities often struggles to get by on their full salary. Therefore, a benefit that offers significantly less is often inaccessible.” Accordingly, Washington State will offer up to 90% of a workers average weekly wage when its program is fully implemented. We are looking for a paid leave program with robust wage replacement at lower levels of income.
·       Is it sustainable? A long-term policy solution that proposes to provide paid leave to workers will be self-sustaining and will not create budget deficits that must be filled through cuts to other programs or impossible choices for families. As Rachel Greszler pointed out in her testimony, “a mere 21 percent of Americans [are] willing to trade lower funding for education, Social Security, and Medicare in order to implement a national paid family leave program.” Tapping Social Security or Unemployment Insurance funds, for example, should not be considered unless new funding streams will result in programs that are adequate to both their original and new purposes. We are looking for a paid leave program with an affordable and sustainable funding mechanism.

What can Hoosiers who support paid leave do to push the conversation forward? Hoosiers can contact their federal representative and let him or her know that you are eager to see action on this issue. Sharing a personal story can be a powerful way to connect (you can also share your story with the Institute here). Would you like to be more involved? Contact us for advocacy opportunities!