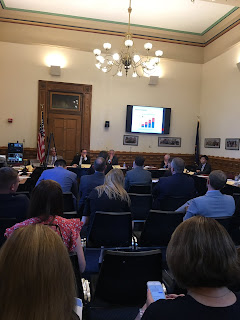 On August 15th, Indiana Institute for Working Families presented reflections on key provisions in the Uniform Consumer Credit Code to the Interim Study Committee on Financial Institutions & Insurance. You can view video of the hearing here.

This blog post is an adaptation of our testimony, and you can also download a copy of the Powerpoint we presented. You can also read the testimony presented by Logan Charlesworth, Network and Resources Manager at Indiana Assets & Opportunity Network, testimony here.


We're grateful that the General Assembly is taking the time to study its consumer credit laws in greater depth, and are eager to share the resources we have found useful in thinking about the marketplace for consumer credit.

Credit is an important tool that enables families to achieve financial well-being. Home ownership is the most common way for families to build wealth. Education, often funded through student loans, can lead to higher wage jobs. Small businesses founded through access to capital can also be a route to financial well-being. And credit can facilitate and smooth day-to-day transactions. However, what can be a blessing can also be a curse - debt that families cannot repay has a lot of negative ramifications, including stress, damaged credit, bankruptcy, poor health, decreased workplace productivity, and ripple effects on the entire economy.

So we’re paying attention to, and concerned about, the amount of debt people are carrying and their lack of savings. Nationally, we’ve exceeded the 2008 peak of household debt and more of that debt is now non-housing related. If you want a more detailed look at what’s going on in your backyard, Urban Institute has an interactive map that provides detailed estimates of types of debt and debt in collections. Alarmingly, 34% of Hoosiers with a credit file has a debt in collections. This tells us that many people are struggling to keep up with the bills they have.

Payday and other types of high-cost lending are often marketed as a quick fix for those who are underwater financially. However, what appears to be a life preserver ends up being an anchor. As one payday borrower from Southern Indiana described it, these loans are a "ball and chain" that will "drag a person into a worse financial situation." She, like many others, relied on other resources to dig out from this debt. You've heard from many of those community resources - churches, township trustees, social services agencies, friends and family - who have described how problematic these loans are. Unfortunately, falling behind on bills is what drives a lot of the payday loan volume – not necessarily one-off emergencies. Borrowers describe a feeling of desperation or despair that leads them to take loans on any terms, and often end up turning to other sources to get out. I don’t think this is what you intended when you added this chapter to the UCCC, and it’s not what borrowers want, either. 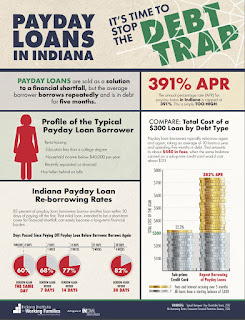 While we don’t have many great statistics on this industry specifically for the state of Indiana, we do know that 60% of Hoosier borrowers take a new loan the same day they pay off an old one - and by one month out, 82% have reborrowed. This is a cycle. And data from Florida – which is a decent proxy for Indiana because it's law is similar, even perhaps a little tighter than Indiana's in terms of how many loans a borrower can have at one time and when you can take a new one – shows that the bulk of the payday lending industry’s revenues are from people repeating these loans over and over and over. Again, I don’t think this was your intention, but it’s where we are.

It’s not just payday lending we’re worried about. High interest rates in general create a dysfunctional dynamic in which lenders can experience success even when many of their borrows default. Here, in this great publication from National Consumer Law Center, you can see an example of a $2600, 42-month loan at 96% - by 20 months, the borrower has paid $4331 in payments, so a decent return for the lender. Even if the borrower declared bankruptcy at this point, the lender has had a successful experience. From the same publication, you can that this lender was able to sustain higher and higher default rates as interest rates rose from 59 to 96% - at 96%, nearly half of borrowers defaulted. 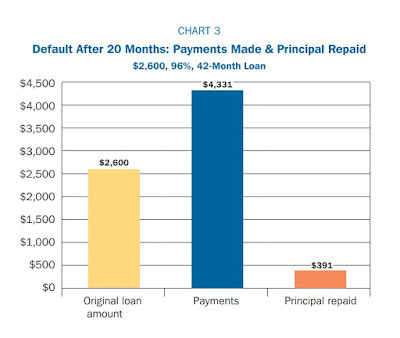 
We’re also worried about loan flipping. This is a different model where lenders may package up-front fees and precomputed interest, and then encourage borrowers to refinance over and over, driving up the effective cost of the loan in a way that’s not at all obvious or transparent. 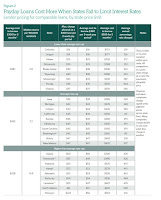 We know that competition isn’t the cure for high-cost lending. Pew Charitable Trusts compared the rates offered by the same lenders in different states, finding that they charge different rates in different states, usually at the state rate cap. Here in Indiana, we have 263 payday loan stores, and yet competition hasn’t driven down prices. It's also worth noting that a handful of banks made similar products available about 5-10 years ago, and the same pattern emerged with significant overlap between people taking bank deposit advances and payday loans, and no evidence that these loans made a dent in payday volume.

So a number of states have capped rates. We’ve been encouraged by what they’ve found: 1. That payday lending isn’t missed, and 2. That former borrowers engage in options like handling the debt they have with creditors or turning to those other options first. We’ve heard doom and gloom stories about a lack of payday lending driving people to take out worse online loans, but the data just doesn’t bear that out. There’s not a significant difference in states with payday lending and without, and states that take strong enforcement action against illegal online lenders see even lower rates of online borrowing.

Finally, it's certainly worthwhile to engage in conversation about how to help more people move into banking relationships and to prime credit. But recall that payday lenders require borrowers to turn over access to their checking account. They are banked. And in fact, one of the reasons people become unbanked is a snowball of high-cost debt payments and overdraft fees that ultimately result in an account being closed.

The real challenge with respect to lending is how to create greater access to prime or high-quality credit. There are a lot of people thinking and writing about to do this, and I have yet to seen one of them recommend taking out loans with triple digit interest rates as a good strategy for building credit.  Rather, they recommend things like “Don’t open new loans or lines of credit” and “Pay off debt rather than move it around.” So in fact, some of the strategies we see people employ in states with strong rate caps ARE the strategies that help people build prime credit.

There’s a lot more we could talk about with respect to consumer credit, but strong, effective interest rate caps are really the central consumer protection. They are overwhelmingly supported by members of the coalition and by Hoosiers in general. As you consider reforms to the code, we urge you to implement strong rate caps to provide a marketplace that encourages responsible lending and borrowing.
Share This