36% in All the Wrong Places

Monday, January 20, 2020
In its 2014 resolution on payday lending, the Leadership Conference on Civil and Human Rights noted:


"Communities of color and other economically vulnerable populations have long been subjected to discriminatory and abusive financial services practices, including redlining and other forms of overt discrimination, as well as predatory and deceptive mortgage and consumer lending, which are disguised as “easy solutions” to credit needs, and have suffered particularly devastating consequences as a result of many of the lending practices that led to the 2007-08 financial crisis."

Among other recommendations, the Leadership Conference urged "all states to follow the lead of 16 states including the District of Columbia, some Native nations, and the military by imposing a 36 percent interest rate cap on payday and deposit advance loans extended to borrowers within their jurisdictions; and to vigorously enforce their laws against unlicensed lenders and work in partnership with federal regulators to address attempts at subterfuge."

In Indiana, a coalition of veterans groups, faith leaders, civil rights and community organizations, and social service providers has united to advance the call for reform. This year, legislators have introduced SB 26 and SB 415 to put a 36% cap on payday loans, and SB 407 and HB 1239, which aim to provide more tools to reign in unlicensed lenders.

The Journal Gazette and South Bend Tribune editorial boards have called for reform.

There is overwhelming public support for a rate cap.

There is new evidence that predatory online lending may see an uptick thanks to lax federal regulation.

But instead of advancing these bills, on Wednesday the Senate Insurance and Financial Institutions Committee will hear SB 395. It puts 36% in all the wrong places.

Here's what that could look like, using some common loan types: 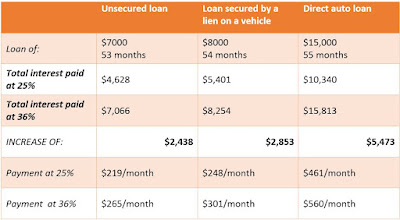 Meanwhile, SB 395 does not put 36% in the one place consumer advocates want to see it: in the payday loan chapter. So if this bill passed, payday lenders could continue to drain millions per year in finance charges from vulnerable borrowers - a reality SB 395 would make even more likely, as the majority of payday loan borrowers turn to payday lending because they are struggling to pay other bills.

This week, we will be in the Statehouse to express our concerns. We urge you to do the same.
Share This