Hoosiers Need Paid Sick Days - Now, and For Our Future

With coronavirus cases rapidly emerging across the United States, health officials are advising workers to stay home when symptomatic. That advice is much easier to follow if you have paid sick days.

The United States is an outlier when it comes to paid leave. Nationally, policymakers have set no baseline standards for what employers should offer. And while some employers recognize that it is not to their benefit for sick employees to come to work for a variety of reasons – including that employees are less productive and could infect fellow employees and clients – far too many still do not. According to the most recent Bureau of Labor Statistics data (2019), about one in four workers nationally - and as many as one in three workers in Indiana – do not earn paid sick days. This is likely because, unlike a number of other states, Indiana has not stepped up to set minimum standards on this front. Digging deeper, the statistics on who does and does not earn paid sick days becomes even more problematic: fewer than half of workers in the lowest wage quartile – often, the people who care for children and the elderly, prepare food, or handle transactions at a cash register and also the people who can least afford to go without a paycheck – lack the ability to earn paid sick days. 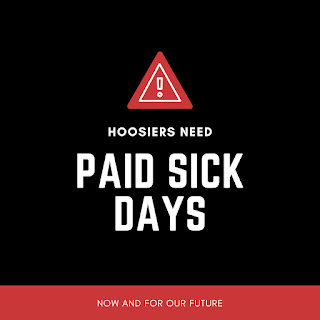 When workers lack paid sick days, they are far more likely to go to work sick. In one Center for Disease Control study, nearly sixty percent of workers who prepare food reported going to work sick. Parents with sick kids and no paid sick leave are much more likely to send those kids to school when they are contagious, or to take them to emergency rooms rather than doctors’ offices for treatment. They do so for good reason: beyond an inability to pay the bills without a paycheck, nearly one in four workers without paid sick days have reported either losing a job or being threatened with job loss as a result of needing time off.

A payroll tax holiday will not encourage workers to stay home when they are ill. Reducing the amount of wages withheld from a paycheck only works for those who continue to earn a paycheck, and it disproportionately benefits higher-income earners. Even for those workers, though, the boost would be relatively small. A generous payroll tax cut of 5% would provide only $80/month to someone earning $20,000 per year. Meanwhile, a worker earning $100,000 would receive over $400/month, and people without earnings – either because they are sick or caring for a loved one – would receive nothing at all.

Instead, policymakers should be looking at approaches to shore up the lost wages of workers who must stay home but cannot do their work there. Disproportionately, these are Black and Hispanic or Latino workers. They are workers without a bachelor’s degree. They are workers who lack savings and are one lost paycheck away from a financial downward spiral. They need robust support quickly, not the trickle of reduced taxes on diminished or nonexistent paychecks.

This crisis will eventually pass, and families will fare better or worse depending on our policy responses. I hope we make smart decisions to meet this moment, and then learn from it to bolster our policy framework for the future. People will continue to get sick, and a single illness shouldn’t wipe out a family’s financial future. It is time to set a minimum national standard for paid sick days in the United States.