Debt: An Effective Tool to Achieve a Financial Goal or a Spiral That Cannot Be Unwound? 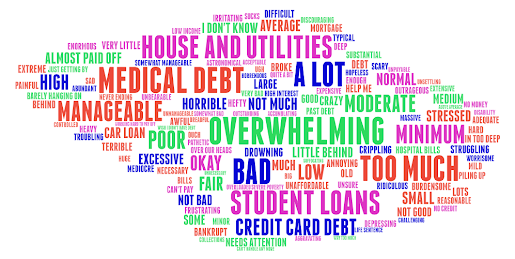 When asked to describe the debt they currently have, clients from Indiana’s Community Action Agencies responded with words like “overwhelming,” “horrible,” and “excessive.” And unfortunately, this should be somewhat unsurprising. A patchwork of protections, at both the federal and state levels, can lead consumers towards a debt spiral that they cannot climb out of. Major life events such as the loss of a job, divorce, health problems, or other financial hardship only compound the problem.

The Indiana Institute for Working Families (IIWF) recently published a brief that utilizes data from a large, representative survey of financially vulnerable Hoosiers throughout the state. The survey provided some insightful and alarming findings. Medical debt was particularly prevalent with 47% off all respondents having a medical debt outstanding. While not as common, student loan balances tended to be higher as 64% of respondents with student loans had balances over $10,000.

Most alarming were the disparities in debt characteristics by race and gender. Black respondents were over twice as likely to have a payday loan as their White counterparts, and women tended to have higher student loan balances (over $10,000) than men (64% vs. 55%, respectively). According to the Federal Reserve Bank of New York, student loans as a share of all household debt per Hoosier has more than doubled over the past 15 years, which is unsurprising given the increased availability of student loans and the rising costs of higher education.

The good news is that there are solutions that can help address these issues. Policies that combat predatory lending, ensure medical treatment is more affordable for low-income patients, create parity between different types of debt on credit reports and through bankruptcy, and, of course, promote financial literacy and education will work towards leveraging debt as a tool and not as a trap.