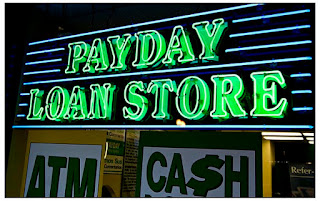 This year, payday lenders have put heavy pressure on our lawmakers to give them a new carve-out in state statute. SB 245 will allow them to offer 24-month loans of up to $2500 at 240 percent Annual Percentage Rate (APR). While the industry argues that there are “safeguards” in the bill, an individual making just $30,360 – an income $10,000 shy of covering the basics for a single adult with one child in Marion County – would qualify for the full amount and would pay $9652 in interest alone over the two-year loan period.


Indiana already has a special exemption in statute for payday lenders, who can make loans of up to $605 for 14 days at rates reaching 391 percent APR. Payday lenders get to “cut the line” and withdraw funds when a borrower’s paycheck is deposited, so the borrower does not have enough left over for rent and groceries. This leads to repeat borrowing, allowing lenders to rake in about $70 million in fees a year.


Prohibition of usurious lending practices is a principle embedded in many religions, including Christianity and Judaism. Exodus clearly states, “If thou lend money to any of my people that is poor by thee, thou shalt not be to him as an usurer” (Exodus 22:25;). And according to Pope Francis, “When a family has nothing to eat, because it has to make payments to usurers, this is not Christian, it is not human! This dramatic scourge in our society harms the inviolable dignity of the human person.”

High-cost lending is not only immoral and unethical, it is also bad economic policy. Research suggests that high-cost lending leads to bankruptcy and other economy-damaging consequences. Beyond this, lower-cost alternatives exist. Credit unions, community loan centers, and even subprime credit cards all provide access to credit at less than 30 percent APR.


Because these financial products damage families’ financial well-being and have ripple effects throughout the economy, other states have moved to curb high-cost lending. Last November, South Dakota voters decided to cap all loans at 36 percent by a 3-to-1 margin. Voters in Arizona and Montana did the same. Active duty military are protected as well - in 2006, Congress prohibited loans to active military members (but not veterans, who are more likely to borrow from payday lenders than the average American) in excess of 36 percent APR.


Authorizing new loans at 240 percent APR would be bad for Hoosiers and bad for the economy.  We urge the members of the General Assembly to reject the damaging proposal being offered in SB 245.