The Time for Work Sharing in Indiana is Long Overdue

Indiana must take advantage of the opportunity included in the CARES Act to help workers, businesses, and our economy weather this storm and bounce back as quickly as possible!

The Indiana Institute for Working Families has LONG been a proponent of a work sharing program in Indiana because we recognize that working Hoosiers want to keep their jobs, even when times are tough. During times of economic hardship, work sharing offers opportunities for employers to keep a greater number of valued employees working with reduced hours, and allows those workers to earn close to full pay. Starting with our first report on work-sharing back in 2011, we have consistently tried to build support for and momentum behind this idea. 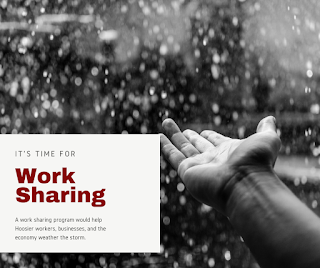 A work sharing program is:

a voluntary unemployment insurance (UI) program that targets jobs preservation by providing employers with an alternative to layoffs during times of decreased demand. Typically, if a firm sees a 20 percent decrease in demand, it would lay off 20 percent of its workforce. Under work sharing, the employer has the option to decrease pay for a particular line or department within the firm by 20 percent for a short period of time—usually about 6 months.
The 20 percent loss incurred by the employee is partially made up by the state—usually half. For example, an employee normally earning $600 per week would, under a work sharing program, receive $480 in wages (or 80 percent of $600) and $60 in UI benefits (half of the 20 percent employee loss). Instead of the $390 she would receive under normal UI benefits, the employee is temporarily earning $540 (90 percent of her original income) and is able to maintain health benefits and avoid the ranks of the unemployed.[i] 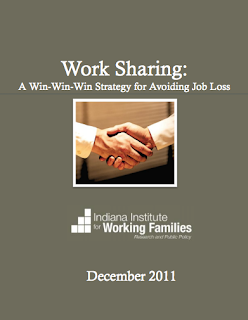 Work sharing programs exist in 28 states across the country and 17 of those states have programs that predate the Great Recession, meaning they were able to use their programs to mitigate job losses during the downturn. Our 2011 analysis showed that if Indiana had had a work sharing program in place prior to the Great Recession, anywhere from 1,862 - 9,984 Hoosier mid- to high-wage jobs – such as manufacturing – could have been saved between 2007 and 2010. While that is a relatively small dent, it is a meaningful difference to both employees and employers in those industries.

Legislation to establish a work share program in Indiana has been offered in every single legislative session since 2011, with support from the Indiana Chamber of Commerce, the Indiana AFL-CIO, employers such as Subaru Indiana, and Indiana lawmakers from both political parties, at federal and state levels.

While we haven’t been able to get a permanent program in place through our state legislature, the CORONAVIRUS AID, RELIEF, AND ECONOMIC SECURITY (CARES) Act, which became law on Friday, March 27, 2020, gives Governor Holcomb the opportunity to establish a work sharing program through an agreement with the federal Department of Labor.[ii] The CARES act says, “any State which desires to do so may enter into, and participate in, an agreement under this section with the Secretary provided that such State’s law does not provide for the payment of short-time compensation under a short-time compensation program.” It also allows that “there shall be paid to each State with an agreement under this section an amount equal to— (A) one-half of the amount of short-time compensation paid to individuals by the State pursuant to such agreement; and  (B) any additional administrative expenses incurred by the State by reason of such agreement.”

This means that Governor Holcomb can put in place a work sharing program - at least temporarily - and that the federal government will pay 50% of benefits, and will pay for additional administration moving forward while we have the program in place. The CARES act also includes grants to pay the costs to implement a program.

In addition, Indiana is in a position to act on this quickly. We can use past pieces of legislation as a blueprint for getting our state’s plan in place quickly, as well as best practices from the 28 states that already have a work share program in place. Most of the past legislative proposals have already been vetted by stakeholders and had bipartisan support. They are the perfect jumping off point for a state plan.

We urge the state to initiate this agreement with the Federal Department of Labor as soon as possible. For years, the Institute has asked policymakers to “fix the roof while the sun is shining,” and put a work share program in place while the economy was strong.  Sadly, now it is not just raining: it is a torrential downpour. The need for policy action is urgent.

*We sent a version of this blog post as a letter to Governor Holcomb and Commissioner Payne as well as to their respective staff members. Stay tuned for updates!

Selected Resources from IIWF on the Potential Benefits of a Work Share Program: