Hoosier Women Continue to Face Challenges Due to Ongoing Pandemic 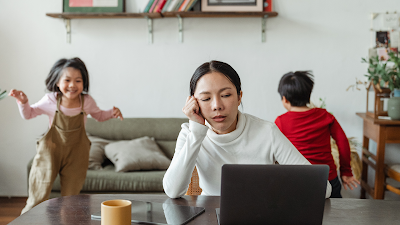 The Institute gratefully acknowledges the support of Women’s Fund of Central Indiana, a CICF Fund, for this blog post and our research on gender disparity in Indiana.

Back in October of 2020, the Institute conducted a qualitative survey that we promoted on social media to hear from Hoosier women in real time about how the on-going COVID-19 crisis was impacting their lives. The responses were startling and we reported them in a blog post: “Hoosier Women Sound the Alarm.” We did not repeat the survey from October; however, we do have some additional survey research that can help us see how women are feeling regarding the pandemic’s impact on their lives.

From September 2020 to March 2021, we surveyed thousands of financially vulnerable Hoosiers about a whole host of issues, including COVID-19’s impact on their lives and well-being.[1] Looking at just the responses that we collected from January to March 2021 from Hoosiers who identified as women, we had 529 responses. Even in early 2021, nearly a year into the pandemic, 51% of these respondents reported that they were financially worse off due to COVID-19. Because financially vulnerable Hoosiers struggle to pay bills, typically don’t have emergency savings, and are likely to be asset poor, interruptions in employment can have long-term, cascading effects on financial well-being. We heard about expenses going up like childcare and groceries, hours being reduced in industries that were hardest hit such as food service, and medically fragile Hoosiers (or those with medically fragile people in their home) not being able to work. For many, these effects were also filtered through the lens of overt and systemic racism. Survey respondents told us:

"We have to choose which bills to pay versus which can be put off. Before COVID-19 we were  paying all the bills."

"I had to take out a loan in the early months of COVID-19 in order to have the food and supplies we needed to get by and now have that monthly bill to pay."

"Single mother to a 6-month-old baby and 9-yr-old struggling to find work that fits my schedule and afford daycare and or find all the above during virus."

"I had to take FMLA due to COVID-19 isolation with positive case in home. Then when ready to go back, schools went to eLearning, all children are school aged. No daycare or family able to help due to jobs."

"Unable to hold employment because of lack of child care during virtual learning.
Struggling from daycare closures frequently due to COVID-19."

"Husband is only income, he has COVID-19 pneumonia, and he was unable to work for 4 weeks. Unsure how many hours he can return weekly while on oxygen. The loss of time on site will continue to affect our weekly income by about 40% for at least an additional 8 weeks."

Risk of infection made earning difficult

"Month off work, anytime I feel sick it’s assumed I have COVID-19 and I have to get a COVID-19 test."

"I have a very medically fragile, disabled child that I am the sole care giver to. She has had 3 open heart surgeries & takes medication for pulmonary hypertension for serious lung disease. My other daughter also has a heart defect. We have been house bound since the outbreak, since with their underlying conditions, they would unlikely recover. For this reason, I had to quit my part time job & lost that income, which affected us."

"I am unable to find full- or part-time work to help support us in fear of getting COVID-19 and spreading it to my infant & older child with Down Syndrome whom has lung disease."

"Because I had a massive heart attack in 2019, and I've been in the medical field for 20 years, but now COVID-19 and all my doctor's will not allow me to work. I do not know anything else but medical."

"Construction worker. COVID-19 has people fearful to allow me in to their homes. They have less money to do improvements due to COVID-19."

"I am unable to babysit in my home as normal to help provide income for my household."

"I am normally employed through gig work during the school year but with the current situations, it has been difficult, especially being Asian."

We also heard from Hoosier women about the things that made the most difference and helped them stay afloat:

"The extra food stamp assistance, the extra boost in unemployment my husband received in the summer, and stimulus helped tremendously.

"The stimulus checks and food assistance (OA and Gleaners mobile pantries) have helped to make ends meet without any problems."

"The extra unemployment benefits weekly paid from the government has been very helpful."

While 81% of respondents reported receiving stimulus payments, only 3% reported that they had received paid leave through the Families First Coronavirus Act. Respondents to our survey were still struggling to find and keep a job. Unfortunately, Unemployment Insurance (UI), one of the most effective support infrastructures, ran out for some respondents. Only 20% of respondents said that they were on UI when they filled out the survey.
Table 1: Survey respondents’ answers to the question: “Did any of the following contribute to you and/or your partner not working or not working as much as you wanted last month?”

Some of the survey respondents with children struggled to find childcare; 16% reported that they couldn’t find care that matched their work schedule and 30% couldn’t find care that was affordable. This is no surprise as childcare affordability has long been a challenge for financially vulnerable Hoosiers and all indications are that COVID-19 has exacerbated those high costs. In fact, a paper from the Center for American Progress posits that the cost of center-based care has gone up 47% since before the pandemic and the cost of home-based care has gone up 70%.

An additional challenge for women re-entering the workforce is the fact that Indiana is still missing childcare slots compared to before the pandemic. According to the Early Learning Advisory Committee’s COVID-19 Impact report, only 58% of childcare programs remained open during the shutdown, 21% were temporarily closed, and 22% had not re-opened as of June 30, 2020. Since then, programs have been re-opening, but according to the COVID-19 Impact Dashboard, we are still down about 290 programs since March 23, 2020. Only a small percentage of these are still closed due to COVID-19 - the majority have closed for other reasons - however, the fact remains that there are not as many places for parents to take their kids to receive childcare. Furthermore, nearly 470 programs out of the 3,928 open childcare programs take Child Care Development Fund (CCDF) vouchers that help lower-income families pay for childcare costs. Finally, COVID-19 safety protocols have limited capacity at childcare facilities compounding the supply problem.

COVID-19 didn’t just affect the financial well-being of Hoosier women but other aspects as well, 73% of respondents told us that their stress levels had increased due to COVID-19. Data from more quantitative sources confirms much of what we have heard from financially vulnerable Hoosier women. Hoosier families are still struggling, and women continue to carry most of the burden.

According to The Century Foundation’s UI Data Dashboard, 49.6% of Hoosier UI claimants since March 2020 identified as women. This is notable because only 46.7% of Indiana’s total workforce identifies as women. For Black Hoosiers, the disparities are more striking. Black Hoosiers accounted for 17.7% of claimants while only making up 9.4% of the workforce. Both Hispanic and White workers had smaller percentages of claimants compared to their share of the workforce (see Table 2).


Not Just a Hoosier Challenge

Women in Indiana and across the U.S. have left the workforce in record numbers. In fact, economist Allison Schrager was recently cited in an NPR story, “Women, Work and the Pandemic.” Her analysis shows that less than 50% of all women, both inside and outside of the labor force, were employed in 2020 – the lowest level since the 1980s! However, because of COVID-19, there is real concern that it will take women a long time to regain their past labor force participation. According to the Kaiser Family Foundation (KFF)’s Women’s Health Survey, women’s reasons for leaving the labor force had just as much to do with the lack of support available for caregiving as it did with the virus itself. Key takeaways included:

· Three out of ten working mothers said they had to take time off because school or daycare was closed.
· Over one in ten women report that they have new caregiving responsibilities as a result of the pandemic.
· Low-income women are three times more likely than higher income women to report quitting a job for a reason related to COVID-19.

The Center for Economic and Policy Research (CEPR) recently released an analysis that bears out the experiences described by women who answered KFF’s survey. The analysis compared the 2019 and 2020 unemployment and labor force participation numbers of women with and without minor children. They reported two disturbing findings for those of us who work on issues effecting financially vulnerable people, pointing to evidence that really is no surprise. Firstly, “‘working-class mothers[2]’ experienced the largest decline in employment and the largest labor force exodus between 2019 and 2020.” The employment level of working-class mothers dropped by 7.4 percentage points in 2020.” Furthermore, the report states that the share of working class mothers who said that they were not in the labor force was 13.3 percentage points higher than that of mothers with a Bachelor’s Degree. This analysis drives home that not only has the pandemic caused a “She-Cession,” but that among women, it is the financially vulnerable women, particularly the moms, who have been hardest hit.

The policies that IIWF have supported for years to close the gender wage and wealth gaps are still policies that can support women during this she-cession.
* Make the expansion to the Child Tax Credit (CTC) permanent.
* Extend the Earned Income Tax Credit (EITC) to younger workers.
* Make comprehensive Paid Family and Medical Leave available to all workers.
* Raise the Federal Minimum Wage and end the tipped minimum wage.
* Increase funding for Child Care subsidies to meet the needs of low-income families with children.   Better yet, it’s past time for universal childcare.

Footnotes:
[1] This survey was conducted with current and former customers of Indiana’s Community Action Agencies. Additionally, the survey was texted and emailed, so participants had access to those technologies.


[2] Educational Attainment, specifically the attainment of a Bachelor’s Degree was used as a proxy for “working class.” They also looked at whether the women had minor children.
Share This